We had set an ambitious programme of visits for today, in an attempt to fill a few of the gaps in our year lists. It got off to a good start when we picked up Hawfinches in the trees at the back of Yew Tree Cottage in West Dean Woods. They were very distant and did not give any picture opportunities but this is a bird that you are always pleased to see.

The next target was Woodcock and Ambersham Common is a place where we have often flushed them in the past. This usually comes as more of a shock to us than to the birds, as they suddenly burst into the air just a few feet in front of you.

However, today it was not going to happen, the place was full of horse boxes, four wheel drives, and yellow jacketed marshals. We got the definite impression that we were not wanted, they probably thought we looked like hunt saboteurs. For our part we were happy to move on and look for some peace and quiet elsewhere. Not an easy task when there is an "El Alamein" style soundtrack playing out all across Sussex as the landed gentry enjoy their weekend "sport".

Next stop was Lavington Common which proved to be mostly devoid of life other than a few Crows and a couple of dog walkers. The best we managed here were two Yellowhammers.

We stopped off at Burton Pond and Lord's Piece. Birdsong was more evident at these two but there was little to look at. Waltham Brooks usually saves the day but even here there was nothing much moving and nothing at all at the Sewage Works. By know I think we had seen more butterflies than birds, not bad for the end of November.

Our final destination was the Burgh to see the Short-eared Owls. The walk in gave us views of Grey Partridge, Corn Buntings, and the usual Buzzards and Red Kite, but unfortunately not the Merlin that we were told had been seen.

We had great views of at least six of the Short-eared Owls for about an hour before the sun went down. I was disappointed in that I only managed one decent picture. In bird photography you are always pushing the camera and the lens to the limits of their performance capabilities but I should have done better. Now I am just going to have to go back and do it all over again. Life is hard! 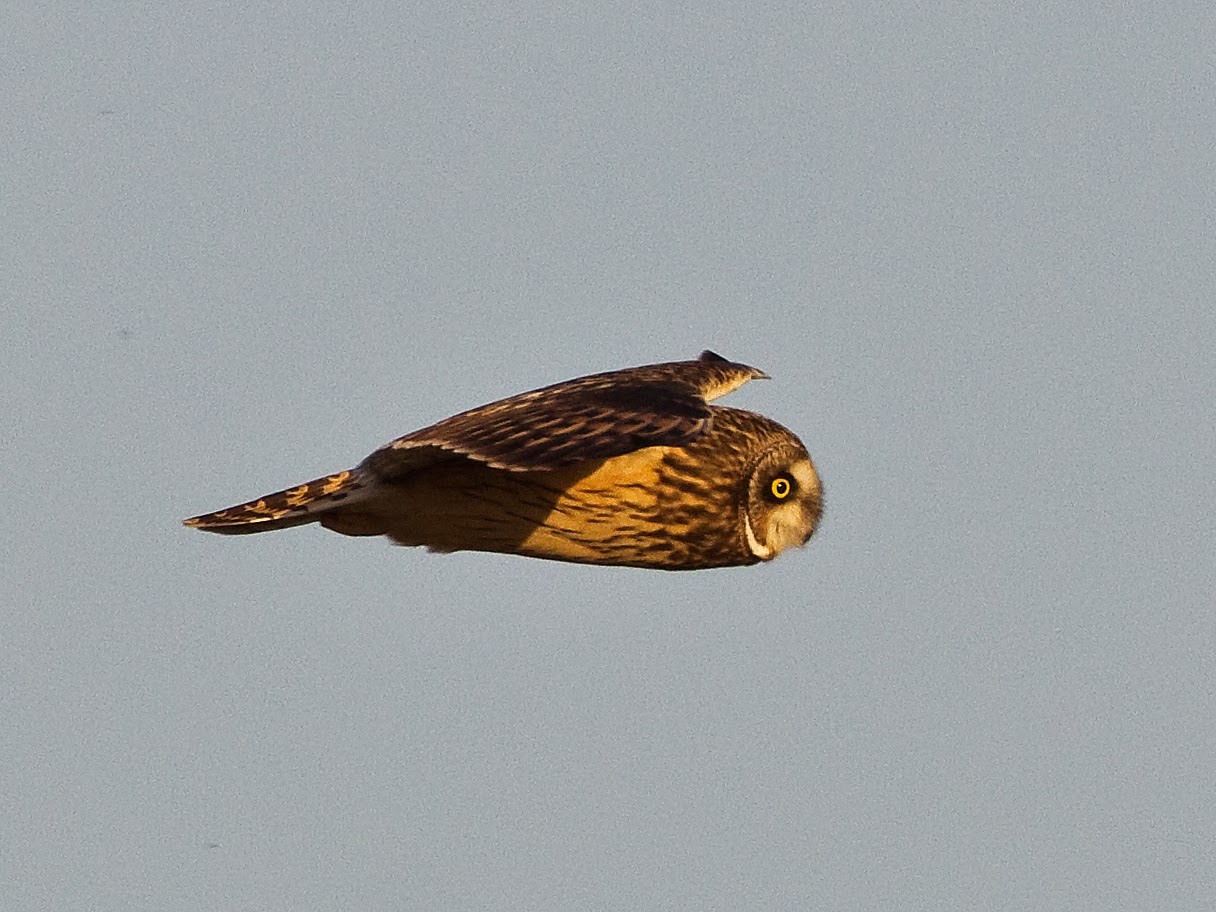 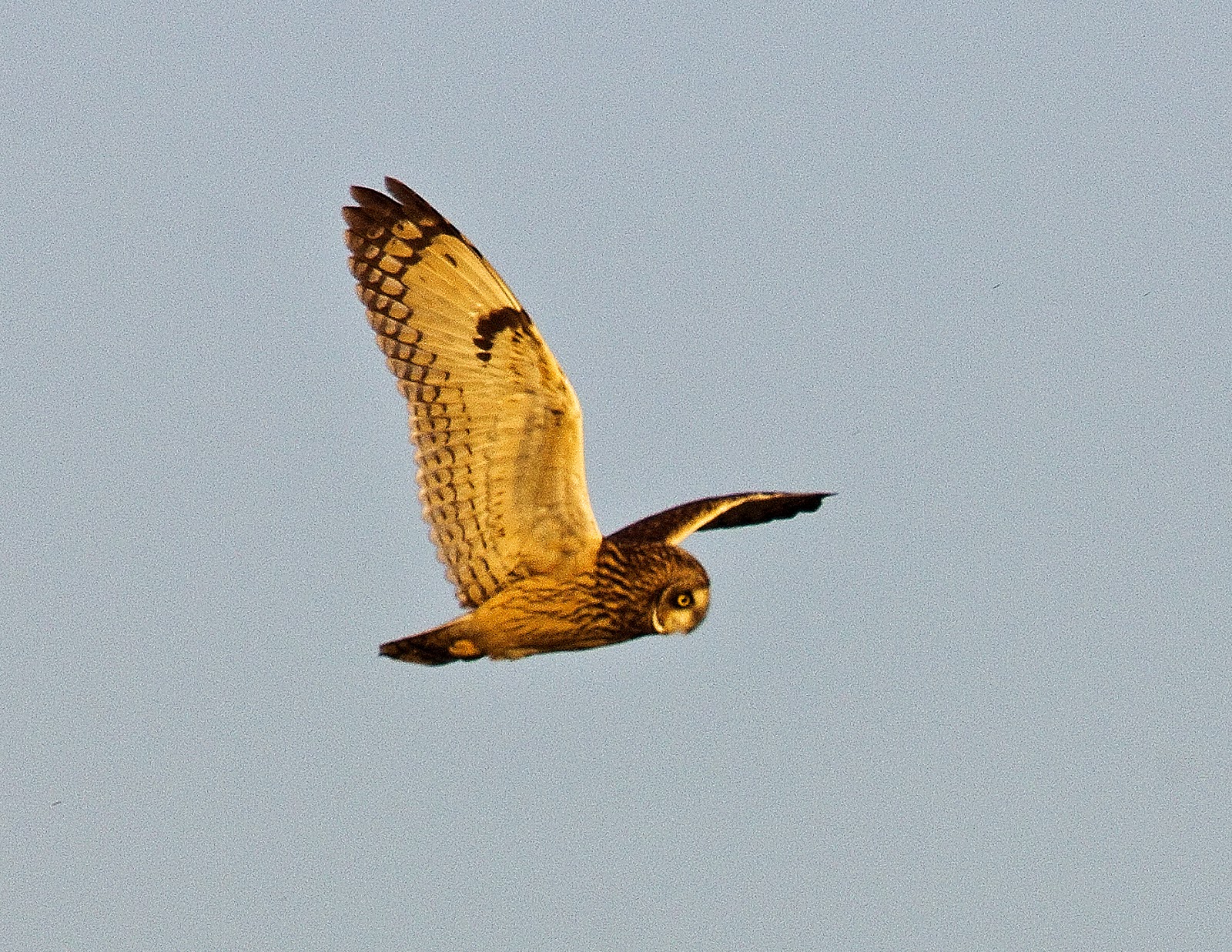 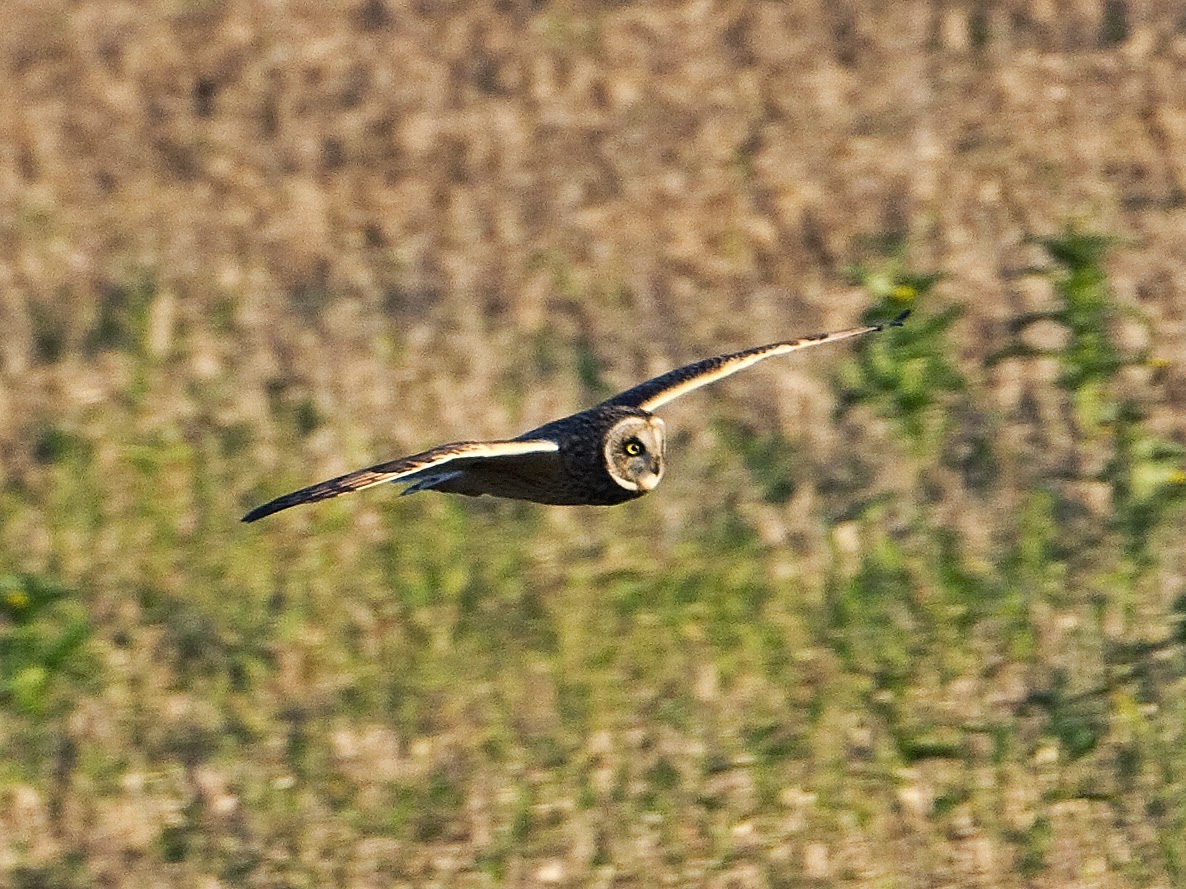 Posted by Martin Peacock at 23:59 No comments:


We were back on our search for Brambling today. In theory, if you can find a decent size Chaffinch flock, you have a good chance of finding a Brambling in amongst them. The difficulty we had today was in finding a Chaffinch flock to search. We tried a few places and found a few odd birds but we could not find any feeding flocks. It was beginning to look like another of those days, plenty of birds to see but nothing unusual and no photo opportunities.

The good thing about searching woods though, is that there is always the chance of finding an Owl and we were fortunate enough to come across our second Tawny in a week.

The challenge is to get close enough for a clear shot without disturbing or upsetting the bird. Perhaps you can creep up on it. No chance, it knew you where there long before you managed to see it.


Don't walk towards it, wander around outside its comfort zone until it gets used to to the idea of you being there. Find the right angle for the shot.

When you find the right spot get your picture and then back off slowly. Don't underestimate the owl, Eric Hosking lost his eye when he got too close to a Tawny's nest.

It was a great day to be out in the countryside, bright and clear with the first chill of winter creeping in. The birding wasn't great but the Tawny Owl saved the day.


For me, Friday of last week was not a good birding day. We had travelled down to Blashford Lakes to see the Franklin's Gull. It was there and was easy to see, albeit after a long wait and hours of searching the thousands of gulls coming in to roost. Easy that is for everyone in the hide except me. I just could not get onto it. Even looking through Dave's scope which was centred on the bird I could not see anything that I could recognise as the Franklin's. I think by then I was just brain dead from staring at gulls.

There were distant views of Goosanders, Egyptian Geese, Ruddy Duck, and Black-necked Grebe but my only pictures for the day were of a Little Grebe and a Coot doing its leg stretching exercises. Going home in the car Dave was doing his best not to sound too happy whilst I tried to come to terms with my total failure.


At first I was a bit negative about going back for another try but Dave convinced me that I should give it another go and volunteered to come along with me to ensure that I did not dip it for a second time.

We did a bit of birding around the New Forest before heading to Blashford. It was all very quiet. We followed a Chaffinch flock for a while in the hope of seeing a Brambling but there was nothing we could be confident about. We also managed to catch up with an old friend that we had last photographed back in February.

On arrival at Blashford we found that the Tern Hide that we planned to use was to be shut between 3.30 an 4.30 for a gull roost event. The Goosander Hide had also been closed by the police as a result of an incident. This only left us with the Lapwing Hide. You get good views out over the lake from there but by 3.30 when the gulls would be arriving you are staring straight into the sun. Still we had no choice so Lapwing Hide it was.

We settled down to an afternoons gull watching with a couple of Green and one Common Sandpiper thrown in for a bit of variety.

The only other item of note was a flock of thirty eight Herons that came in to roost late afternoon. This was the first time I had seen them in a large flock. Other than that it was a long afternoon and by the time the sun started to set at 4.15 no one in the hide had spotted the Franklin's. Then we had a call from the Tern Hide to say that it had been spotted and that it was close to us. It turned out to be directly in the path of the setting sun but as it dipped below the horizon we had a few minutes of light left and everyone in the hide, including me this time, managed to get good views.

I had already lost sight of the bird in the gathering gloom when I decided that I should try to get a picture of it. By then I could not see where it was so I just pointed in the general direction, wound up the ISO, fired off a few shots and hoped for the best. They are not brilliant but these are my record shots of the bird.

And, to finish off the day, we had a starling murmuration swirling over our heads as we walked back to the car.

Posted by Martin Peacock at 23:59 No comments:


Weather conditions were not ideal but we could not risk missing the Rough-legged Buzzard so Wednesday morning saw us travelling over to Jevington to look at what was a truly
magnificent bird.

The photography was difficult with strong winds, overcast conditions and regular heavy showers. It did brighten up a bit later in the day but then we had problems with the white areas of the bird burning out. Photographers are never happy with the light. It just makes you realise what a really efficient instrument the human eye is. Camera manufacturers have a long way to go.

When we first arrived we tried following the footpath up onto the hill behind the Buzzard's usual hunting ground. This would give us views looking down on the bird instead of the usual silhouettes you get when taking pictures against the sky. It was a good idea but the bird must have known we were there and it didn't come close. As soon as we moved back down to the road it started flying up to the area we had been standing in.

Anyway here are my picture. I would have liked better but they are a record of what turned out to be a great days birding. Things have really been looking up over the last few weeks. 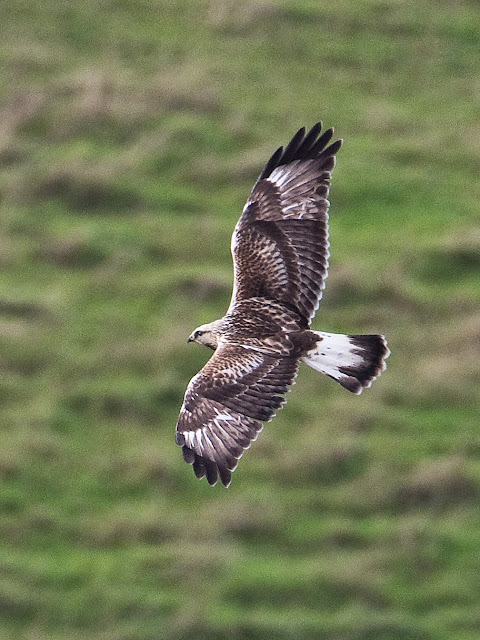 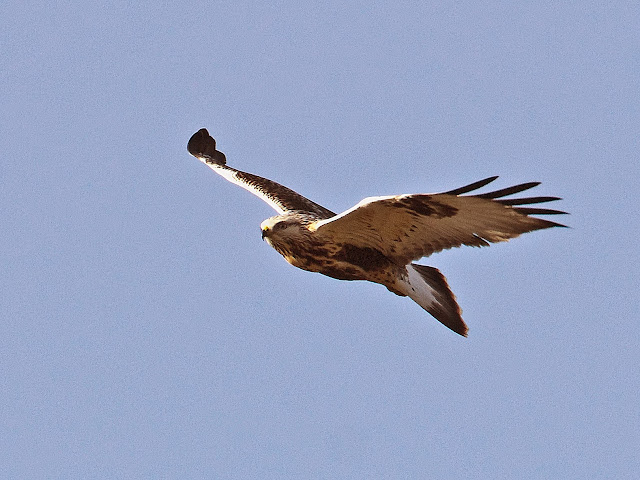 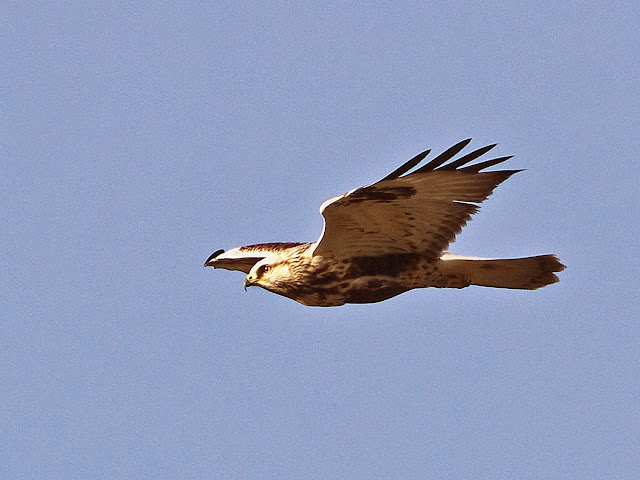 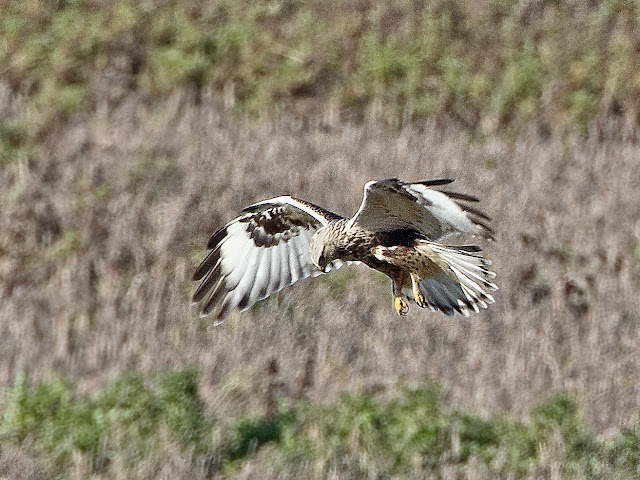 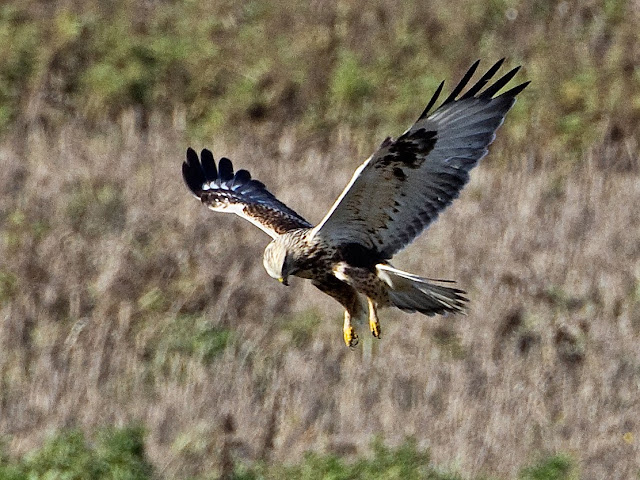 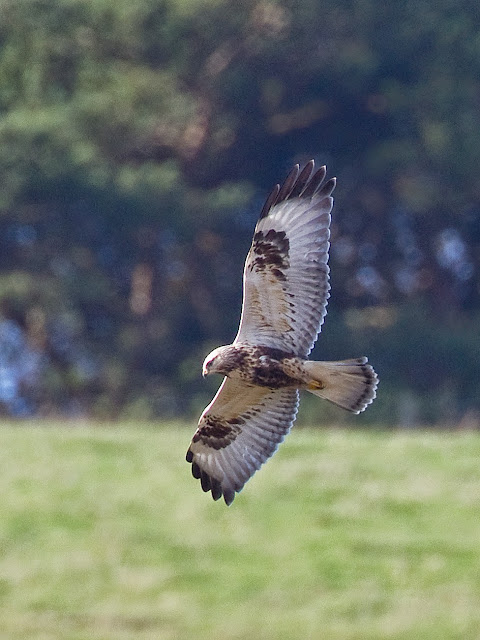 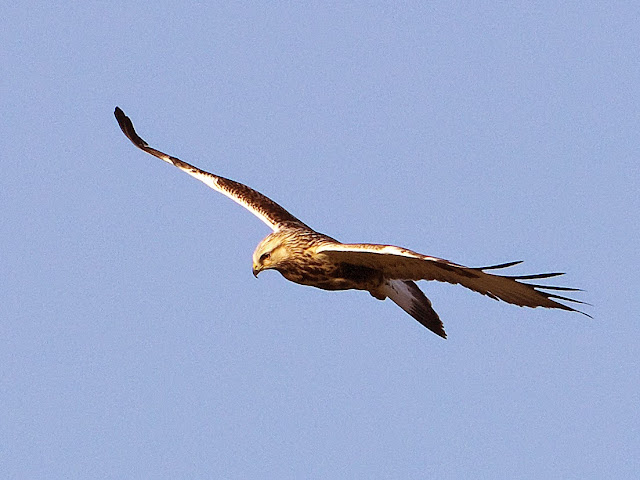 
Reculver had been looking to be worth a visit for a few days. Shorelark, Snow Bunting, Lapland Bunting, and Desert Wheatear had all been present and showing well. Unfortunately other commitments had kept me away over the weekend, so Monday it was pick up Dave and head over to Kent to see if there was anything left. From reports it looked as though the Lapland bunting had gone but we were hopeful of the other three.

Delaying to the Monday was good in one respect in that whilst there were a few birders about we had missed out on the twitch that would have taken place over the weekend. Unfortunately we had also missed out on the Desert Wheatear that appeared to have moved on overnight. I was not too worried at this, the year tick would have been nice but we had good photographs of this bird from one that had turned up at Worthing in October 2012. The Shorelark was the main target of the day.

A walk along the sea wall from Reculver Castle towards Coldharbour Lagoon soon found us in the right area but with the usual message of "its just flown you should have been here ten minutes ago". We only had a short wait before it returned and gave good views and with the clouds clearing we also had good lighting, a rare combination. 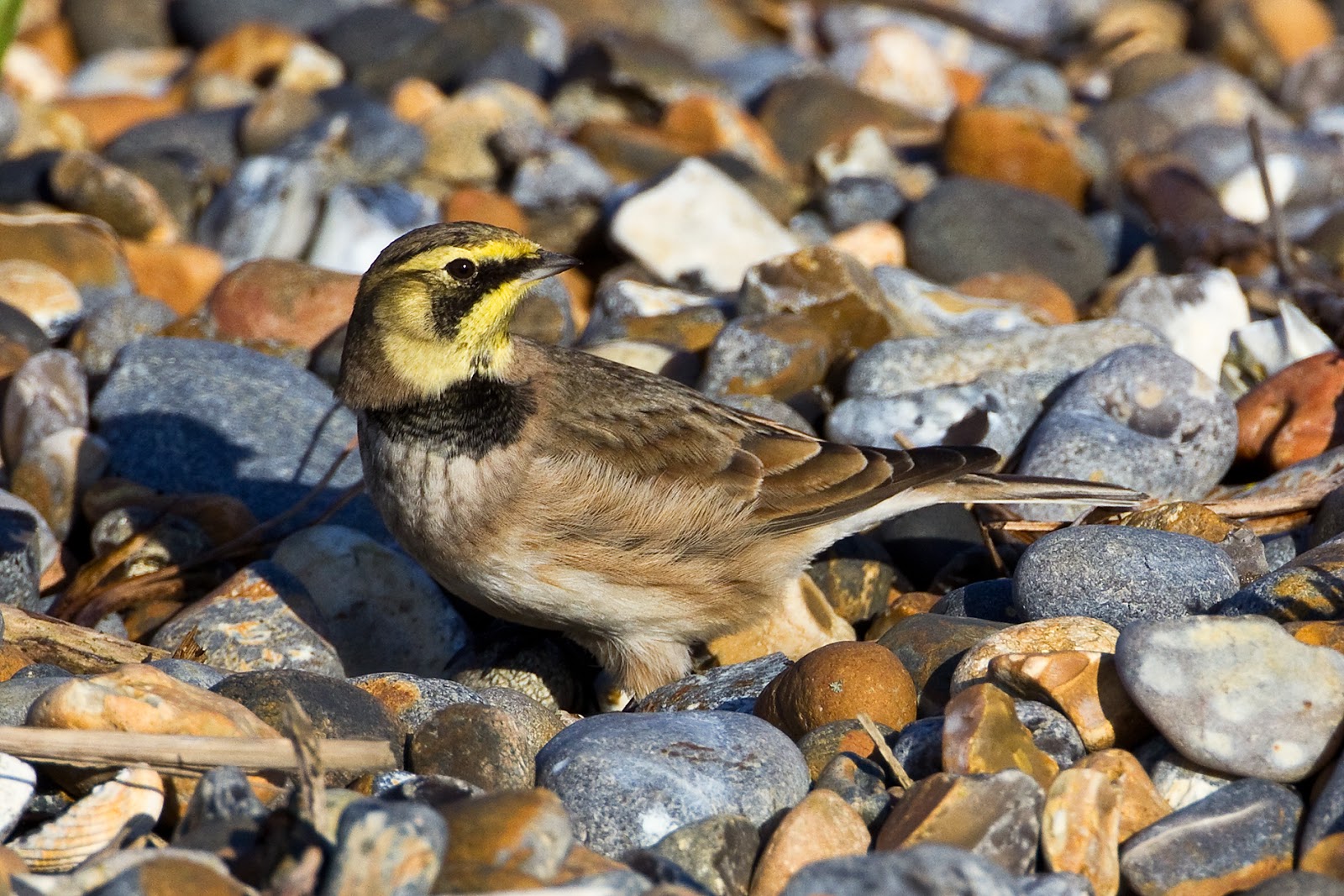 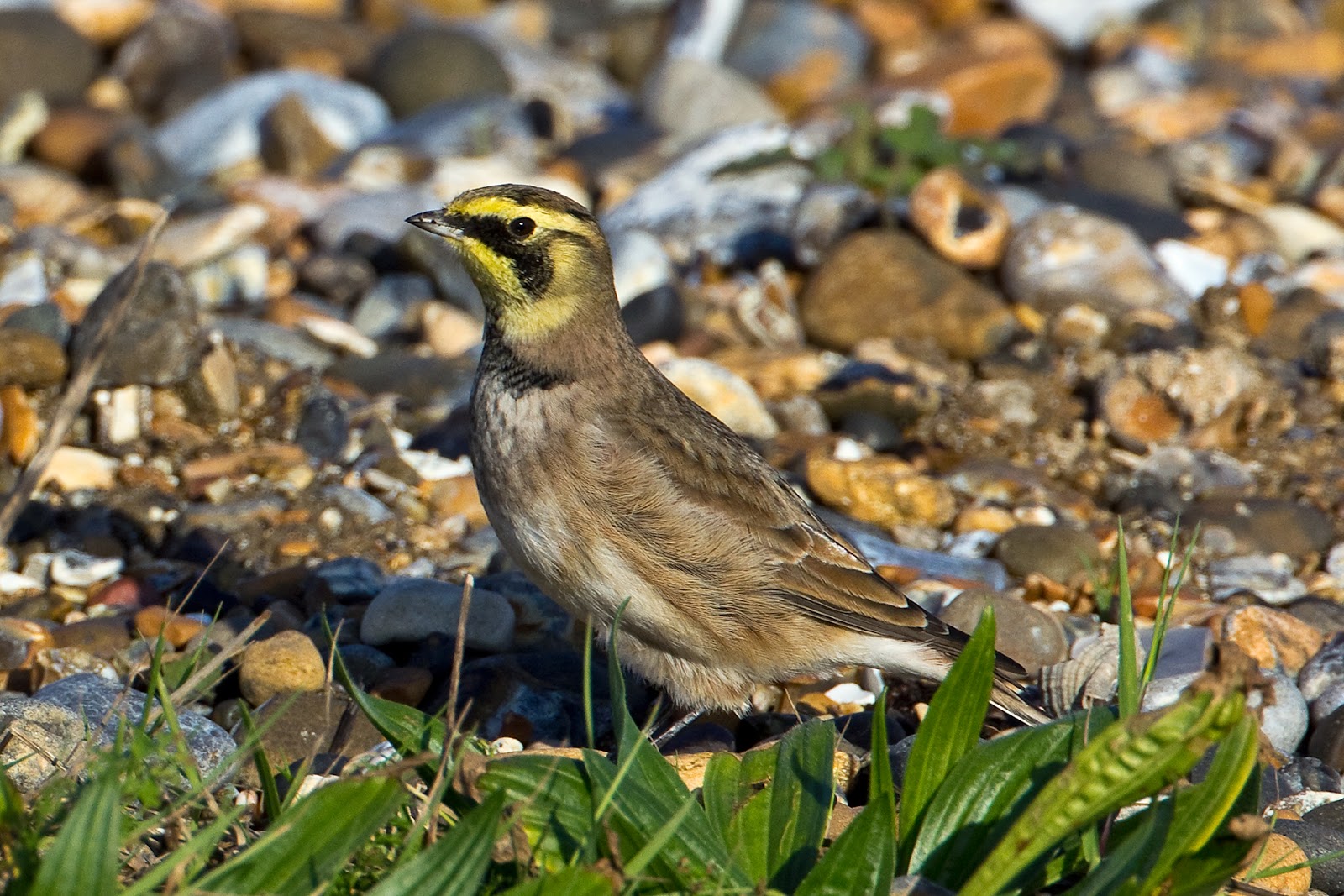 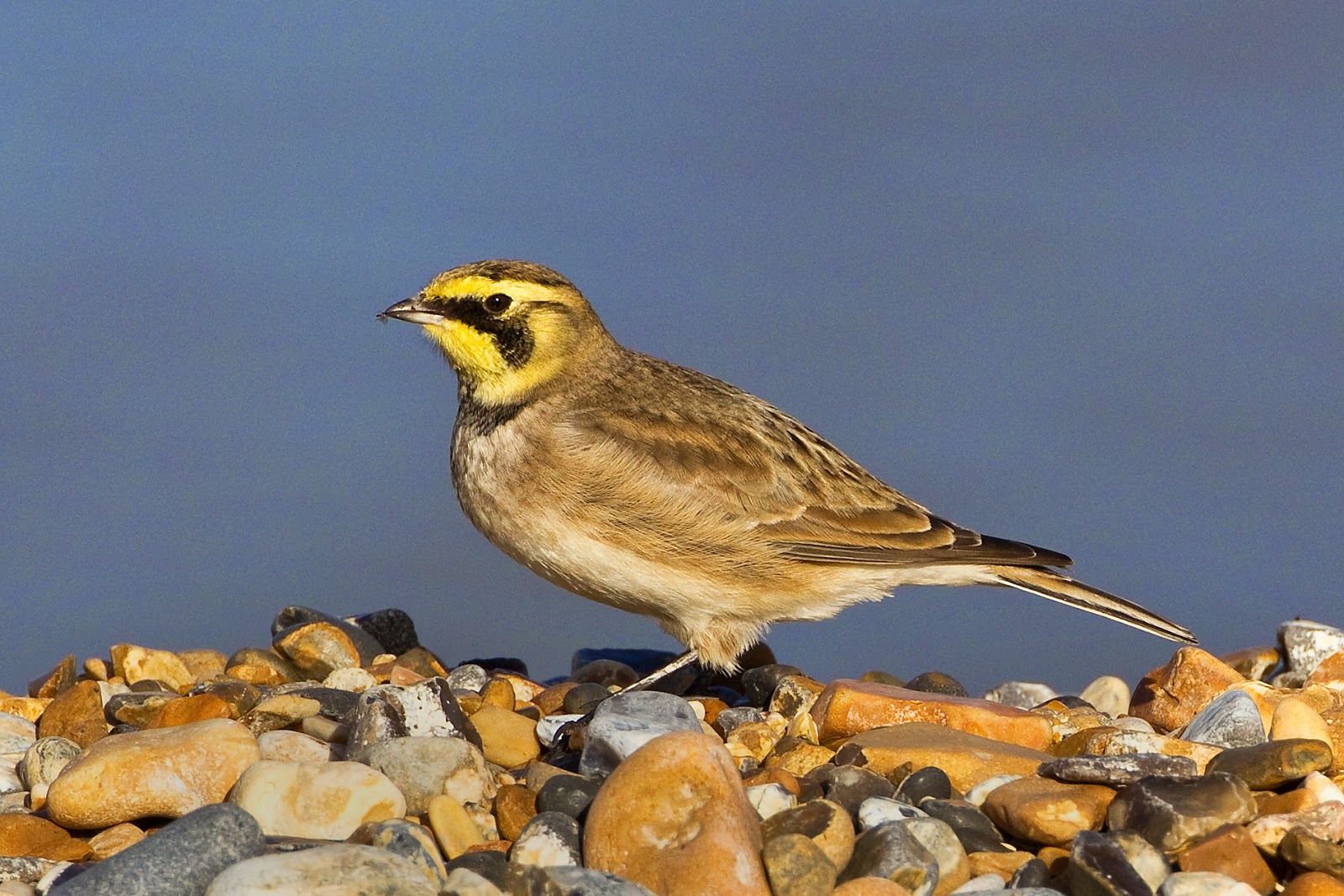 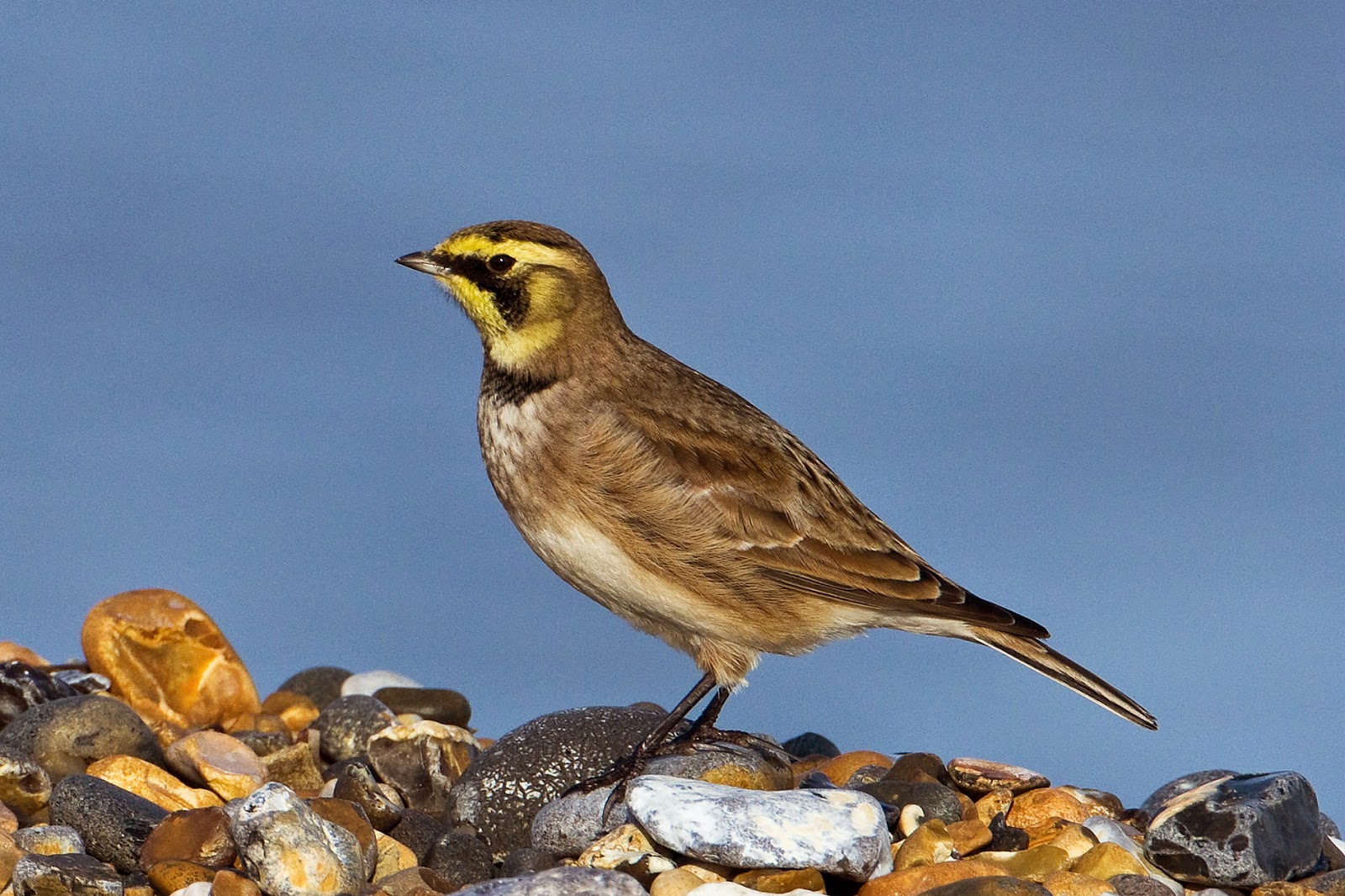 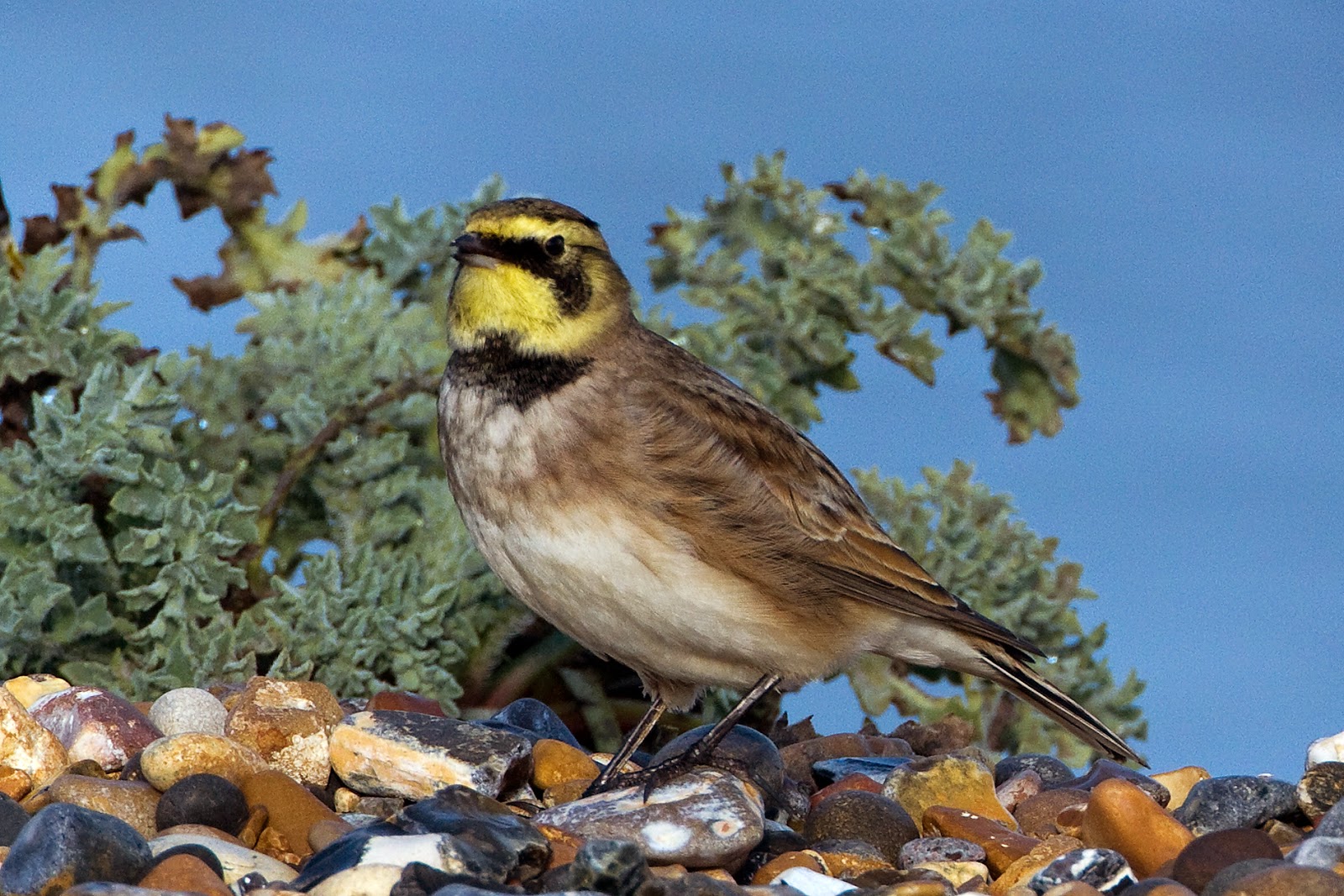 The Snow Buntings proved a bit harder to find but we eventually caught up with them. 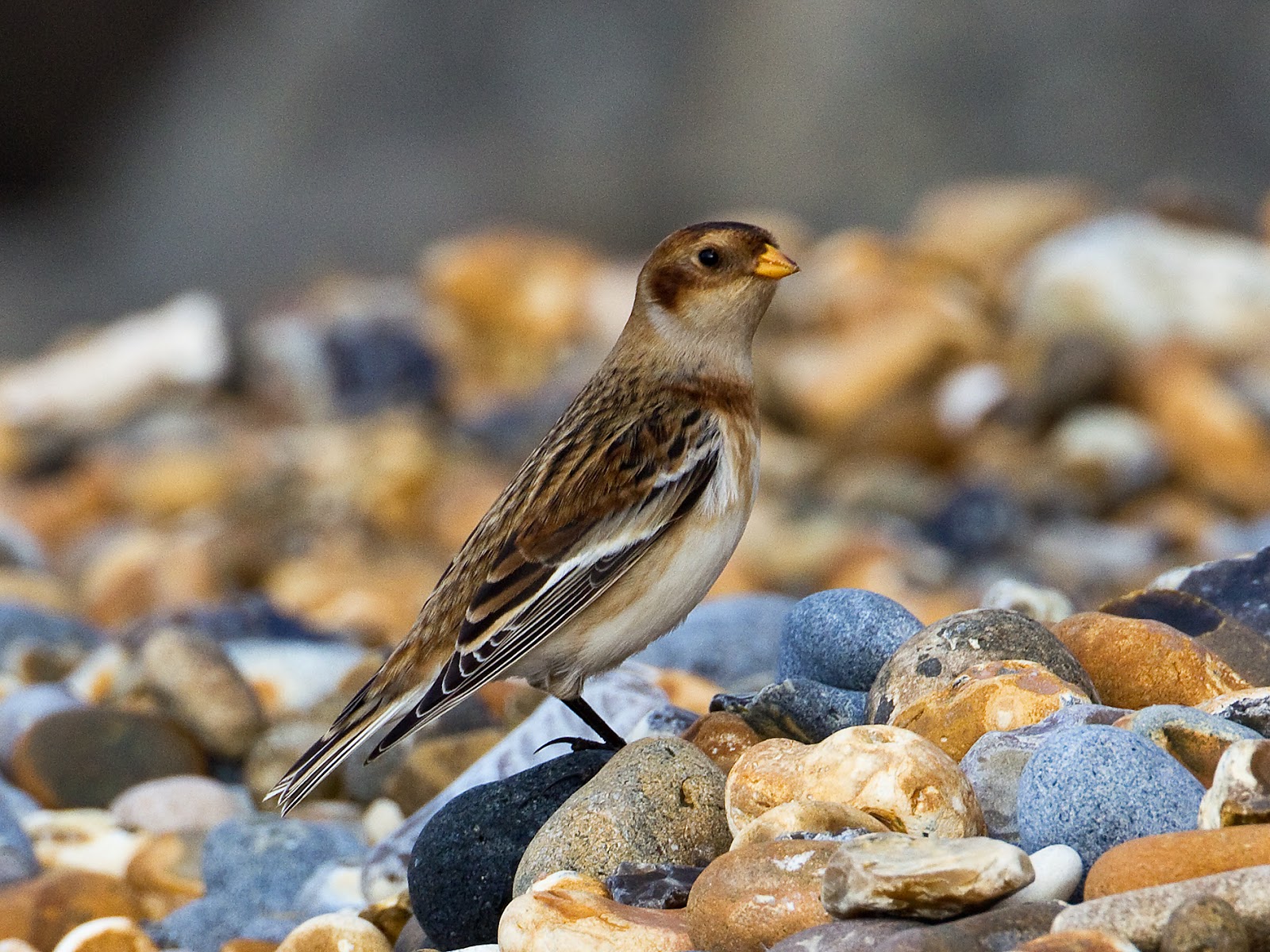 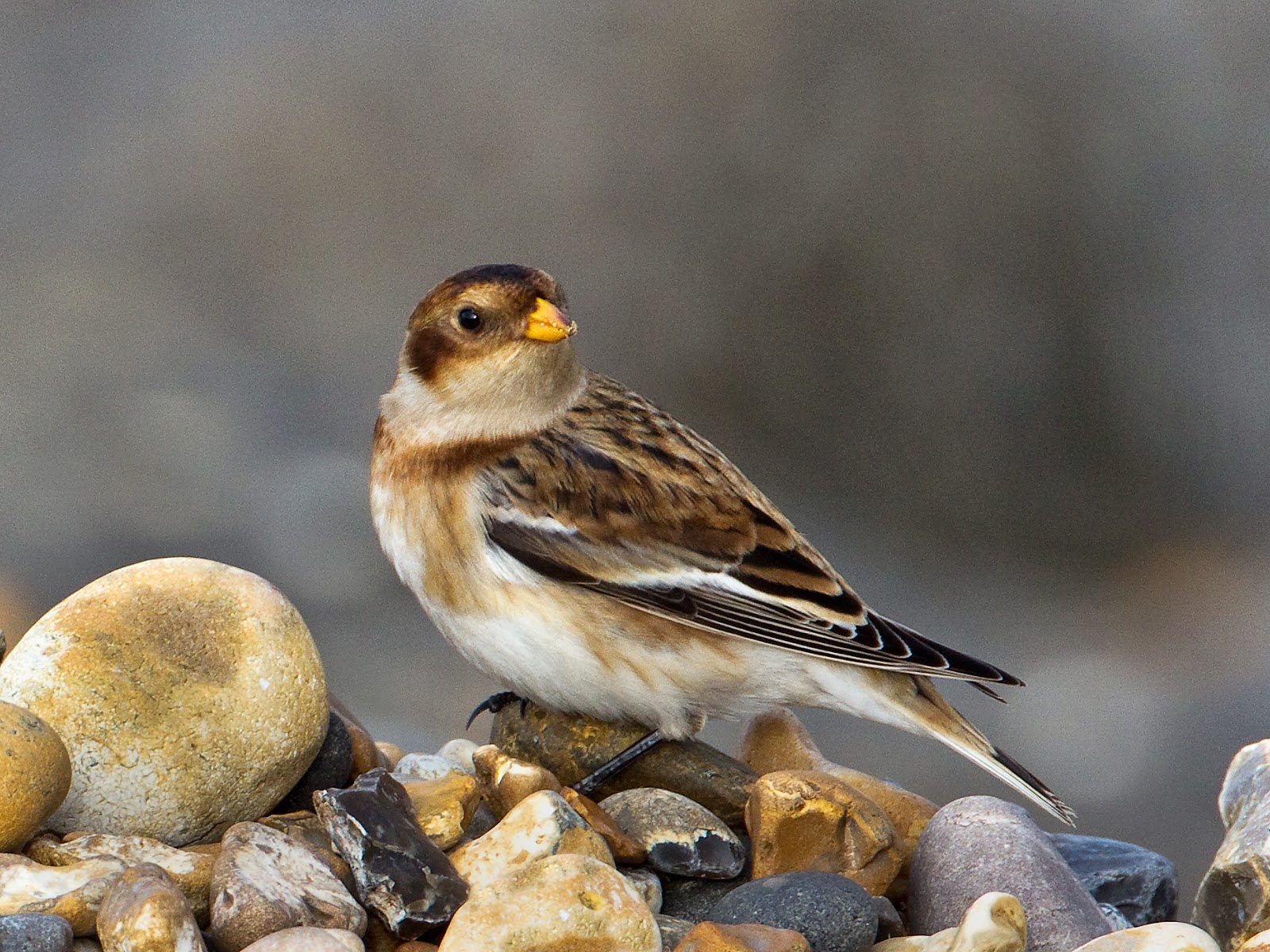 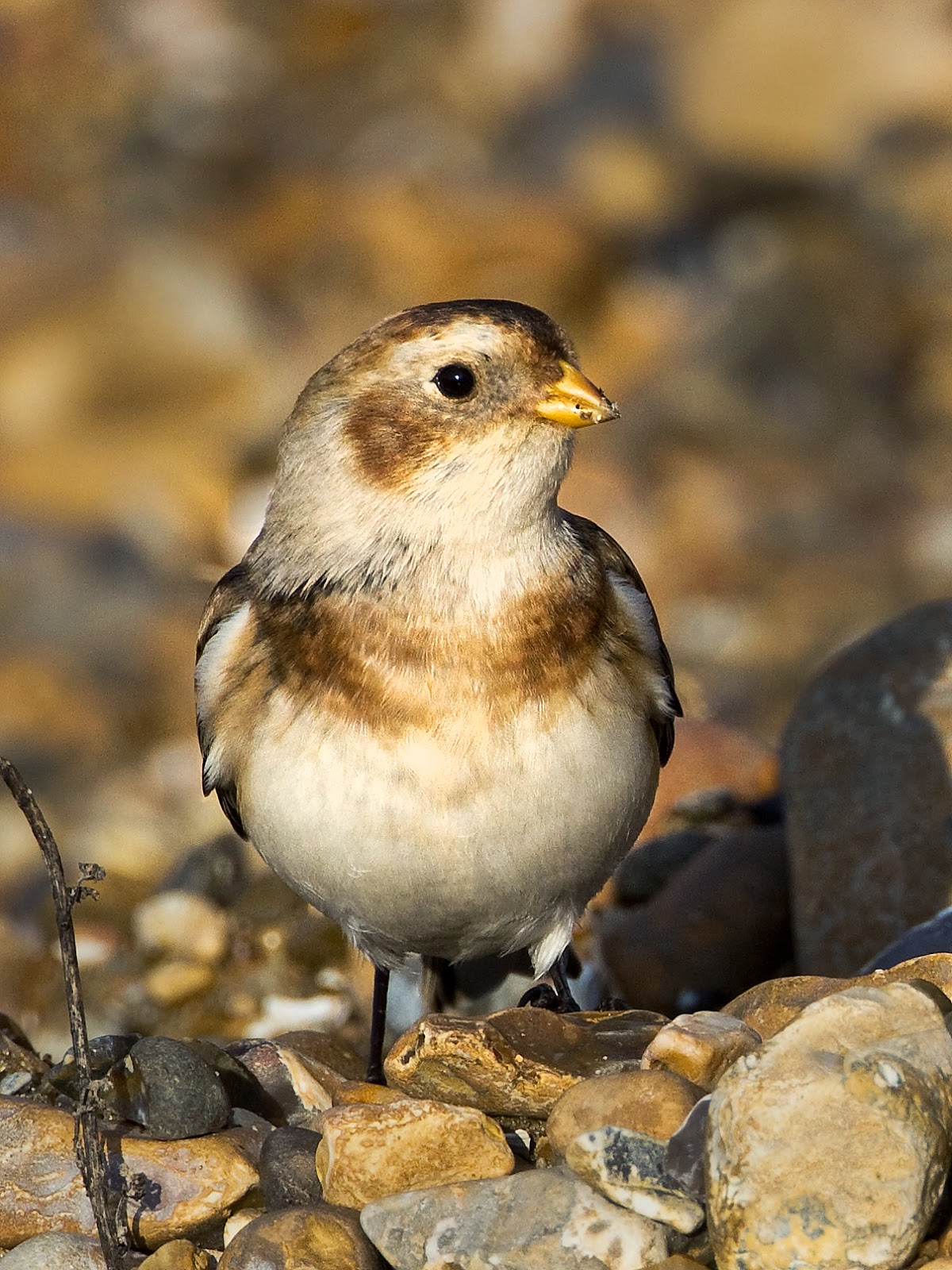 There was a large supporting cast of birds just off the sea wall and plenty of picture opportunities.


Early afternoon and we set off for home with a planned stop off at Oare Marshes. There was the nagging suspicion that the Desert Wheatear would turn up just after we left but overall we were happy with pictures that we had managed to get.

Oare marshes always gives you plenty of birds to look at, so much so that it is often impossible to get a decent picture, but what you do get is a great atmosphere. As you open the car door a wall of noise hits you and there is continual movement as birds move around and squabble for the standing room that is in short supply and flocks of different birds swirl overhead.

It was a long way to drive for a non twitcher but we had a great days birding. Reculver is a place I will be going back to. It has the one thing missing along the South Coast, the sun is over your shoulder when you are taking pictures out to sea.