I sat at home Sunday and Monday watching the reports of the American Wigeon at Pulborough. We had the family round and I couldn't get away. It is one of a very few birds that I have seen but then have been unable to get a decent picture of. My best effort to date is shown below

However, if it was on the back of the scrape at West Mead hide it was probably within range. I rushed up to Pulborough Brooks on Tuesday morning and round to the hide only to find that it had moved. It was now over on the North Brooks and could be seen from the hanger. Seen that is, at a distance of about half a mile and when it decided to come out from hiding behind a grass bank. No picture.

Fortunately I had seen three Ruff from the West Mead hide so I abandoned the American Wigeon and went back to photograph those. 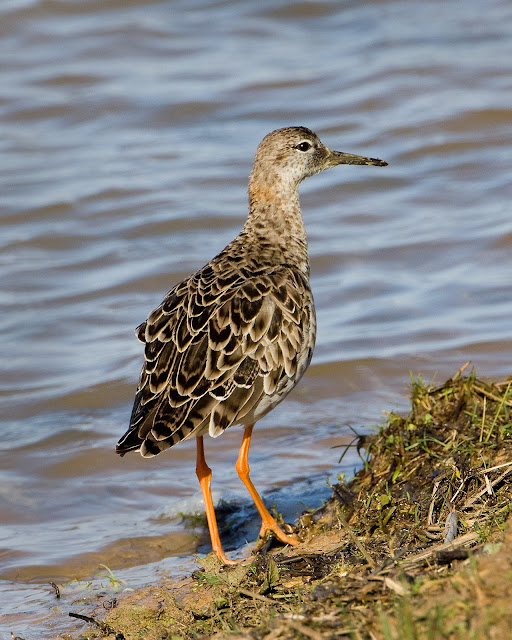 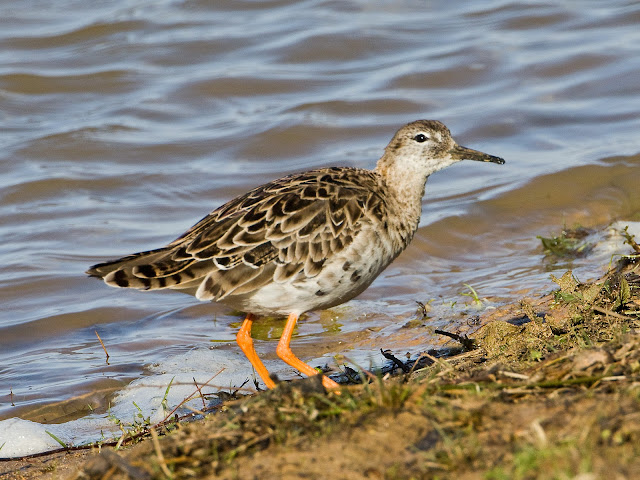 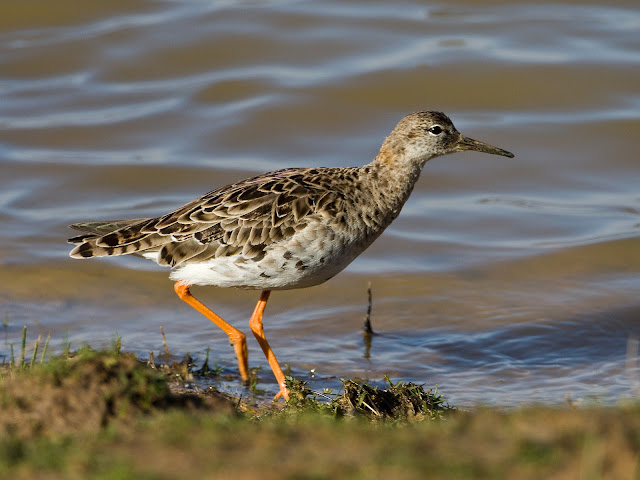 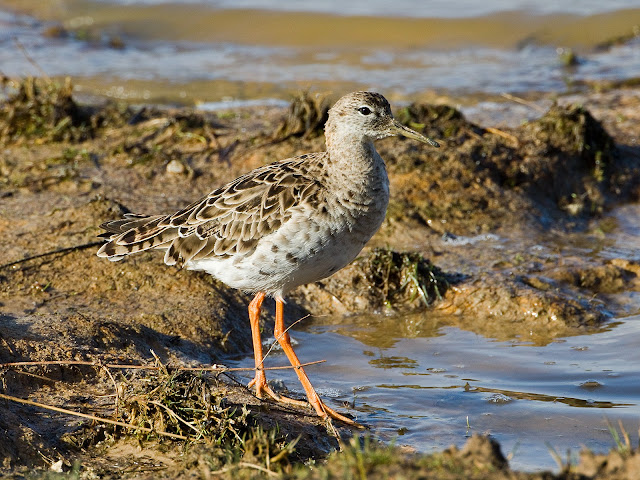 There was also the peregrine in its usual tree close to the hanger. If its looking for dinner what's the betting that it has spotted the American Wigeon?


and my first Adder of the year. This was a big female, probably over two feet long. It moved slowly out into the sun stayed there for a few minutes and then returned to cover as the clouds moved in. 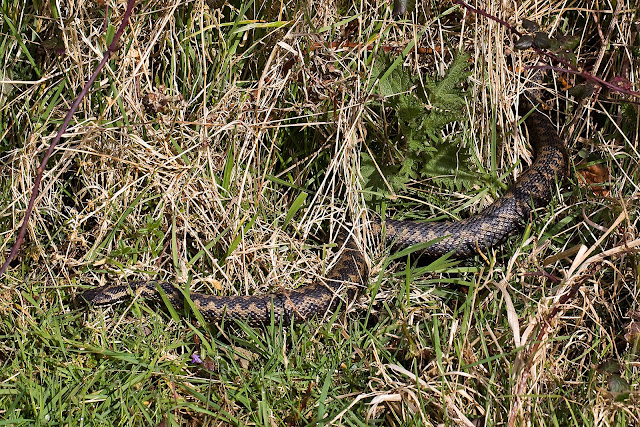 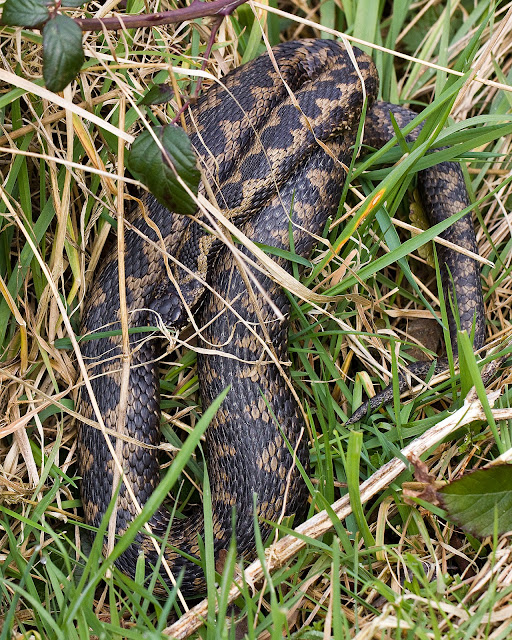 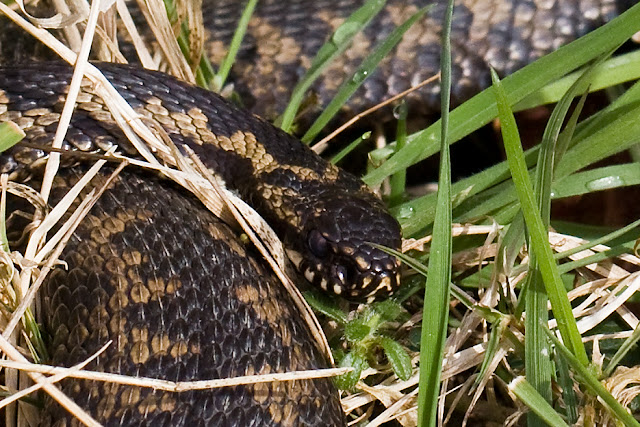 I then went down to Arundel. I had read at the weekend that ducks like kale and pea shoots more than bread, after all it is more like there natural food, so I took them the trimmings from the weekends brussels. The Swanbourne ducks were having none of it. They didn't even investigate, they just paddled off to see a couple of young children throwing in half a loaf of supermarket white bread - proper duck food.

However, I did manage to pick up a Treecreeper before I left. 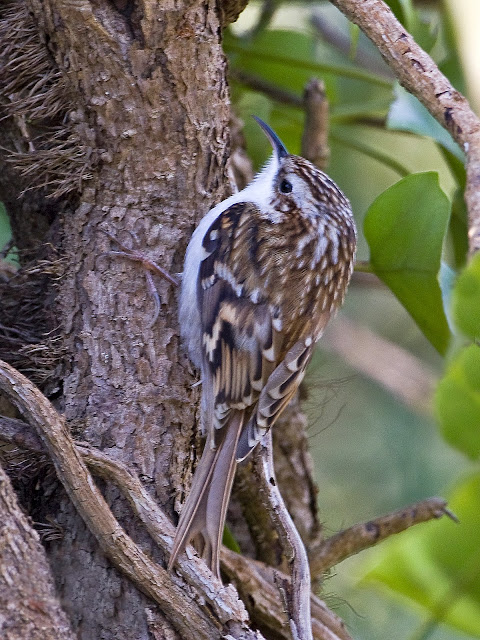 No picture of the American Wigeon but perhaps it will stay a bit longer and move back to the West Mead scrape.


Being the second part of my blog about our week in Scotland, this part is focused more on the smaller birds and as always the number one target was the Crested Tit. This was a new location for us, a bit less busy than Loch Garten, and with the added advantage of Red Squirrels and a good supporting cast of other birds. The only disadvantage was that it was difficult to spot the birds as they flew in, so most of the shots are taken on the feeders. 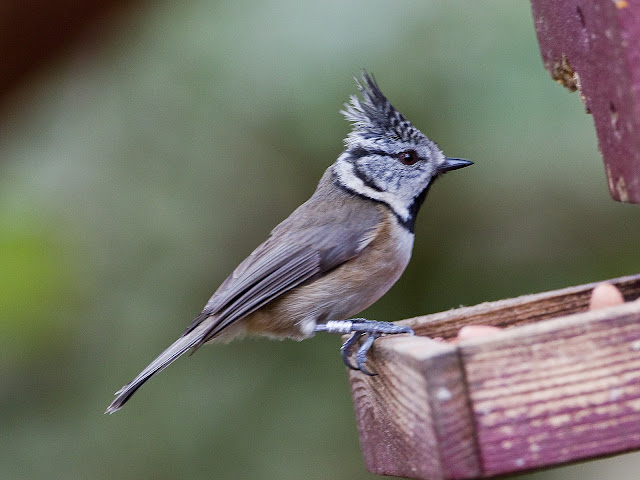 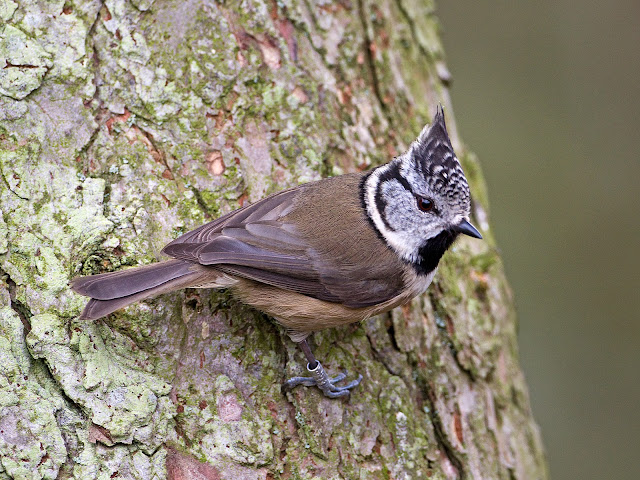 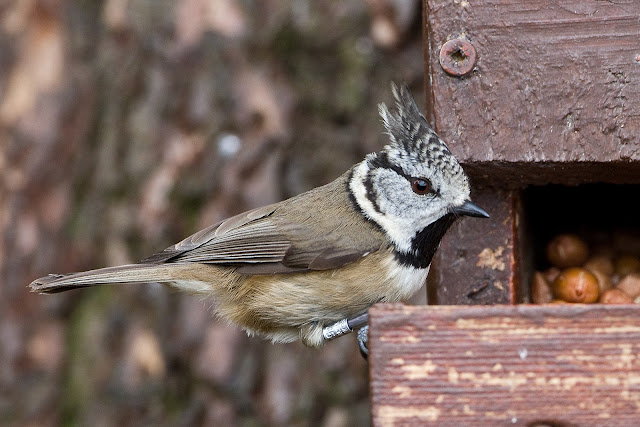 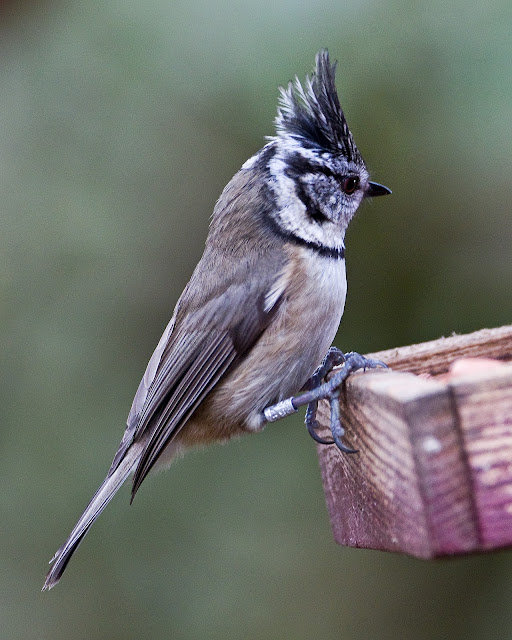 Other birds at the site included Goldcrests, with the unusual sight of one using the fat ball feeders, Coal Tits, Yellowhammers, Siskin, Long-tailed Tits, Robins and an army of Chaffinches.


and of course one of the Red Squirrels 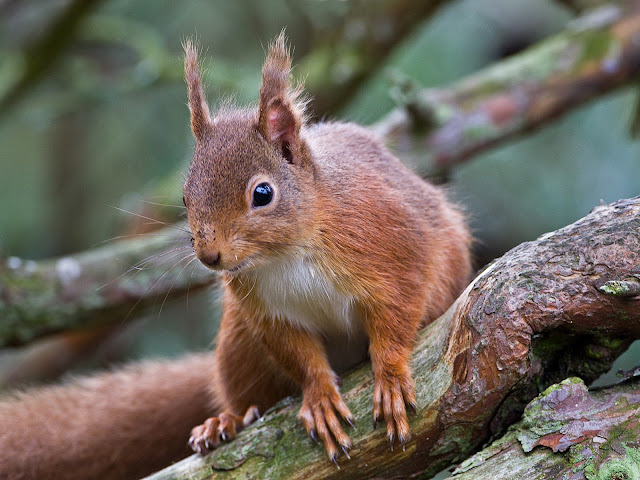 We found Twite at at Netherton Farm at the south end of Findhorn Bay. There were about sixty birds in the flock including a few Linnets but they were very mobile and difficult to photograph. The shot below shows the yellow bill of the Twite.

There were a number of Glaucous and Iceland Gulls being reported in the area. We spent a bit of time scanning the Hopeman Pig Farm seeing first and third winter Iceland Gulls. Unfortunately the third winter flew just as we found it so the pictures below are of the first winter bird.


Other birds seen are shown below.

There was a distinct shortage of waders at all sites that we visited but we did find a flock of around a hundred and fifty Knot at Burgh Head. These are a particularly annoying bird to try to photograph. There are too many of them to be able to get a shot of a single bird and the flocks are too big to be able to get the whole lot into the frame. The best thing is just to sit back and enjoy the spectacle of the flocks movement.

And finally on the way home we called in at the Northumberland Wildlife Trusts Cresswell Ponds. We had tried it on the way up looking for the Long-billed Dowitcher but were short of time so left without finding it. This time local birders put us onto it and we also saw Snipe and a Water Rail so a good end to the holiday.

It's a pity a that a lot of these shots are of birds on feeders, I usually try to avoid that, and also that many of the birds photographed have been ringed, but then beggars can't be choosers, it was that or no pictures at all.

A week in the Cairngorm National Park and on the Moray and Nairn Coast gave us some excellent birding, with a couple of life ticks for me, but with very few photographs for the blog. The problem was the weather, it was just too good, warm sunny days, calm seas and virtually no wind. The sea ducks, that we had hoped to find sheltering in the coastal harbours, were long gone or were far out to sea and the geese also seemed to be starting their migration early.

We did manage to see one hundred and sixteen different species over the week. That included  White-billed Diver, Black Grouse, Crested Tit, Twite, American Wigeon, Green-winged Teal, Ptarmigan, Iceland Gull, and Surf Scoter. However most were a long way off and the scopes got more use than the cameras.

The notable missing bird for the week was the Snow Bunting, which is normally present either on the coastal sand dunes or around the car park at the Cairngorm ski lifts. We could not find them anywhere although there was one reported the day after we left.

Fortunately we had stopped off at Seahouses Harbour before we crossed into Scotland and the Eider we found there proved to be the only close encounter we had with sea ducks all week.

The harbour also had a few Great Black-backed Gulls, this one with the remains of a crab. 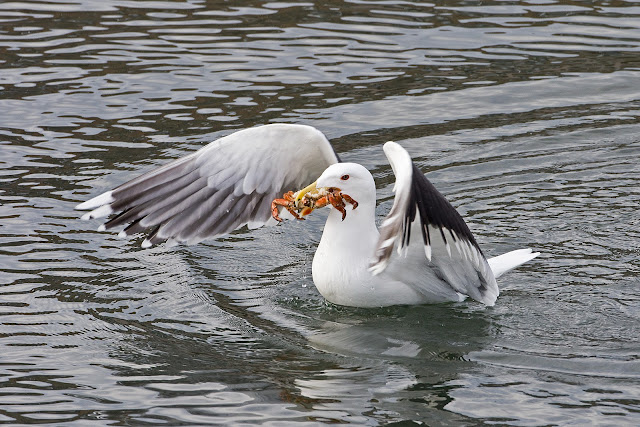 First stop in Scotland was at Musselburgh. Lots of birds including Velvet Scoter, Long-tailed Ducks, Goldeneye, and Bar-tailed Godwits but no Surf Scoter that we could see and no opportunities for photographs. So it was onwards to our base for the week at the Grant Arms Hotel at Grantown on Spey.

It was nice to find the Black Grouse. This is a bird I used to see regularly when I was out walking on the hills, but it seems to be a lot rarer these days. This is  actually the first I have seen since I started keeping records four years ago. The pictures are poor but this is not a bird that is easy to approach when out in the open. We did not want to spook them so we took our pictures at a distance, hence the massive crop, and left them in peace. 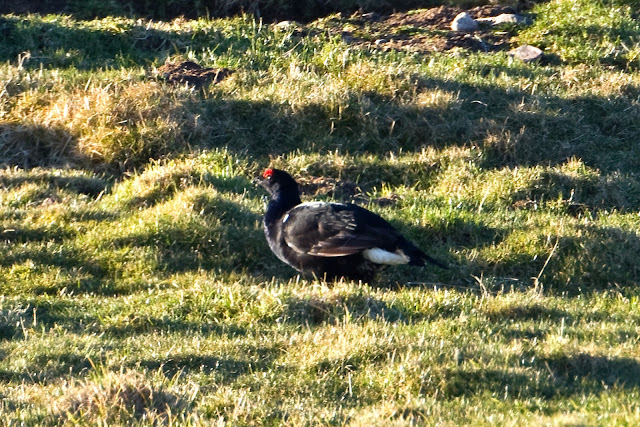 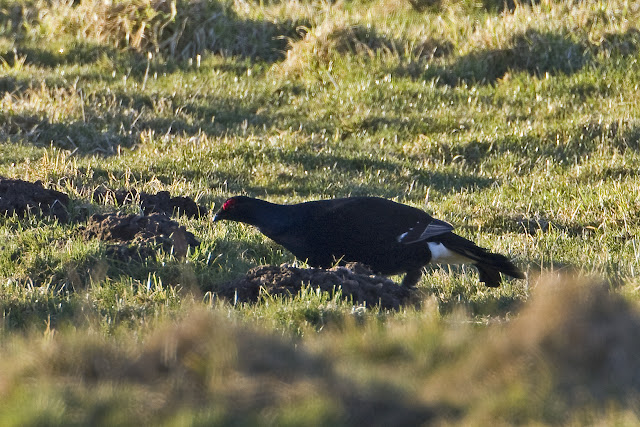 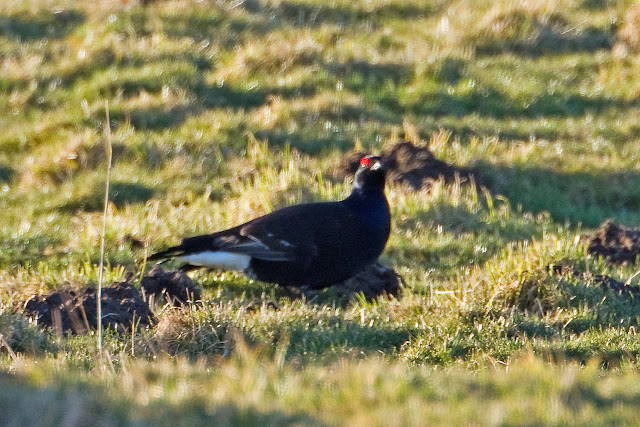 By contrast the Red Grouse is a much easier bird to photograph. These shots were taken at Lochindorb where the birds were close by the road. 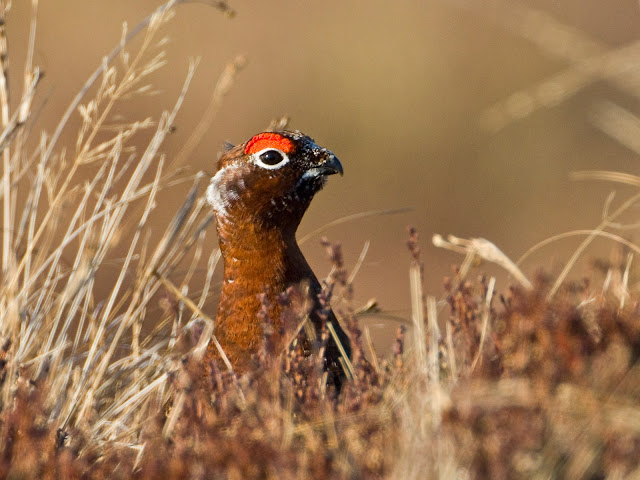 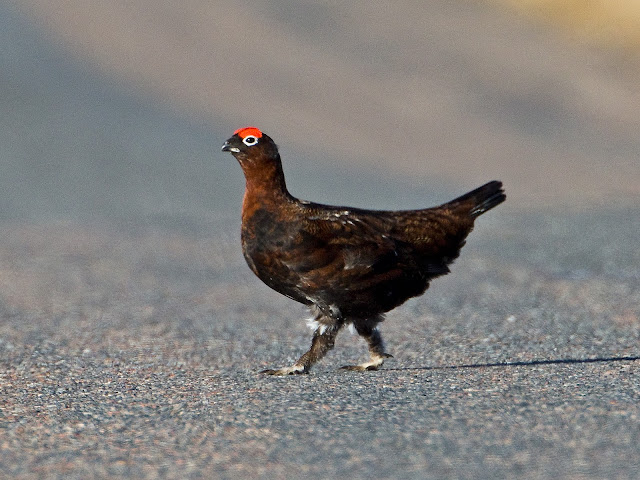 The last of our target birds in the Grouse family was the Ptarmigan. Dismissing the soft option of the Cairngorm Funicular we trudged up the route to the northern corries. Last year we had seen a number of birds around there but this year, with the snow line higher, we found only one. Dave heard it calling and after a search he found it, distant, on the other side of a deep snowfield. Last year the birds came close but this one was staying put, happily feeding on the heather shoots.

They are a great bird to find, the walk may have been hard work but the celebratory beer that evening tasted all the better for it.

We had two visits and spent about a day and a half looking for Eagles in the Findhorn Valley. Slim pickings is probably the best description for the birds found. On the first visit we had one decent flyby from a juvenile Golden Eagle from which I failed to get any decent pictures. My best efforts are shown below. 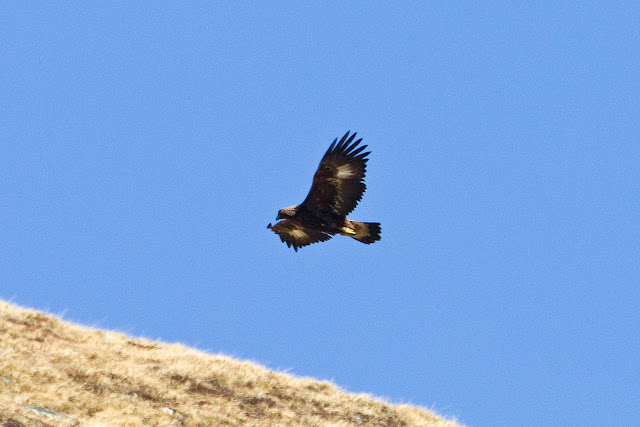 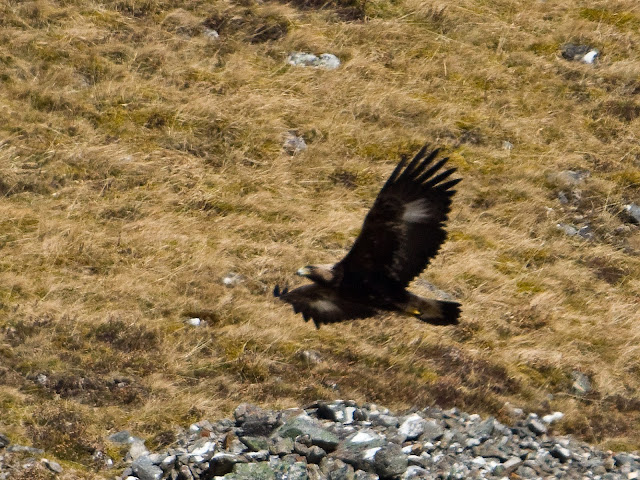 There were a couple of other distant views of Golden Eagles and one possible sighting of a White-tailed Eagle but it was to far off to be able to confirm the identification.

The shot below shows the closest we got on the second visit. 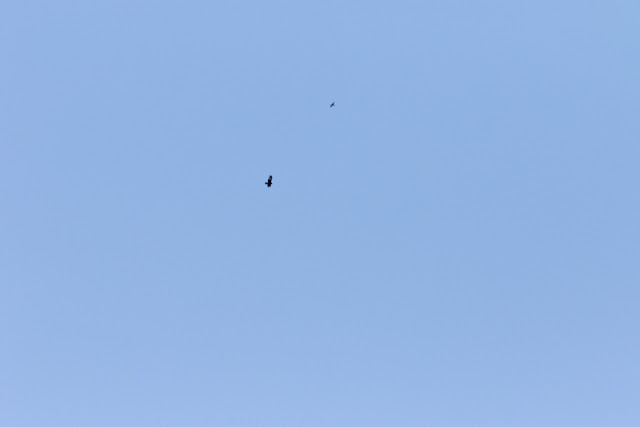 It's taken using a 500mm lens and 1.4 extender with the birds at least a mile away. Blown up a bit bigger you can identify the lower bird as a juvenile Golden Eagle. The upper bird, Dave identified using his scope, as a peregrine which was one of a pair harassing the eagle.

There were Dippers in the river but they did not show for a picture so to keep me occupied I ended up photographing a Mistle Thrush and a Pied Wagtail that kept us company on our vigil and a couple of the local Buzzards.

More to follow in part two of the blog headed as Crested Tits.


Posted by Martin Peacock at 22:13 No comments: Links to this post

Dave and I have just got back from a weeks birding in the Cairngorm National Park and on the Moray and Nairn coast, but more on that in the next blog. This one is about our stopover on the way up at RSPB Fairburn Ings. We chose the site as it has resident Willow Tits. They are absent from Sussex and most of the South East and, if seen, would be a life tick for both of us.

I think we could probably have told the difference between the Willow Tit and its look alike the Marsh Tit but the beauty of Fairburn Ings is that it has no Marsh Tits. It is always good to have the odds working in your favour.

Fairburn Ings is a great site and just a few minutes from the A1. The wardens gave us some useful information and we found our first Willow Tit within a few minutes of arriving.

They were very difficult to get onto in the trees and picture opportunities were limited, so in the end I resorted to photographing them on the feeders. There was no way I was going to leave without a definitive picture. 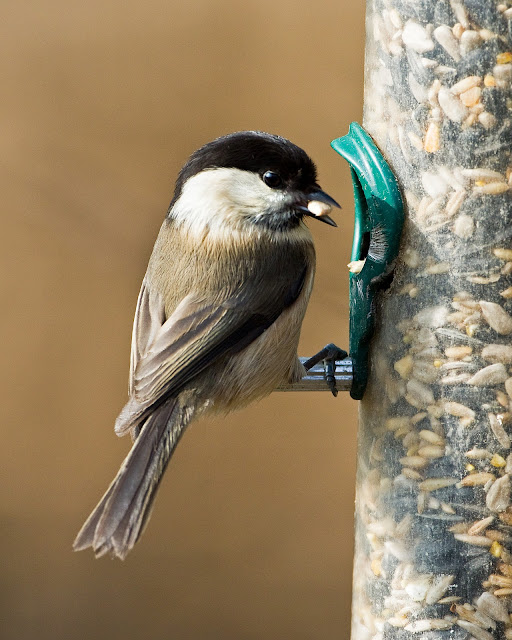 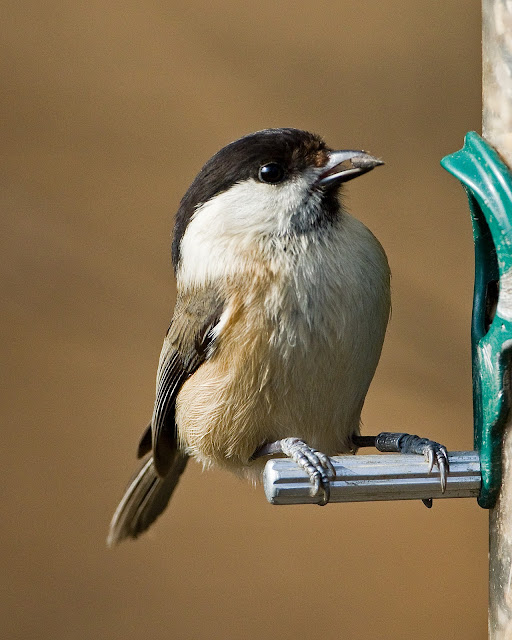 Identification of the Willow Tit is now done either by the call or by the absence of a white spot on the base of the upper mandible. However, the birds shown here do seem to show other characteristics that aid the separation from the Marsh Tit. That is, dull rather than glossy black cap, larger black bib, and thicker "bull" neck.

Willow Tit in the bag on the first day, a great start to the holiday.

The reserve also supported nesting Tree Sparrows, another species mostly absent from Sussex, a good number of Bullfinches, and gave close up views of some of the more common birds. 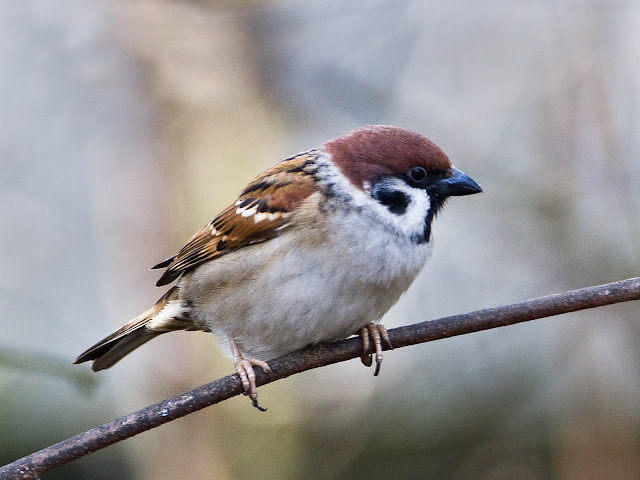 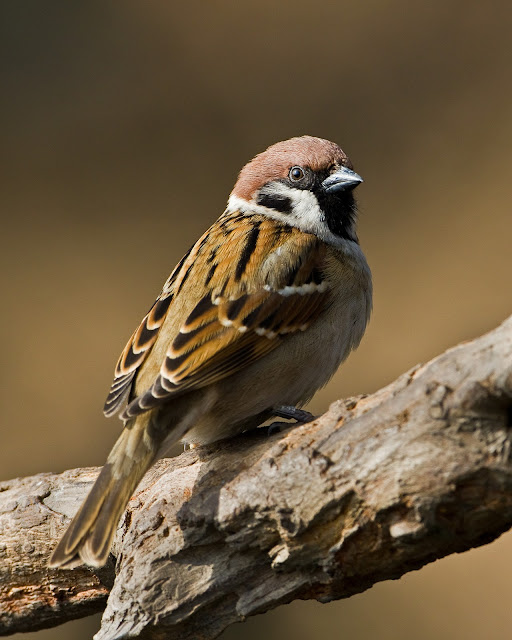 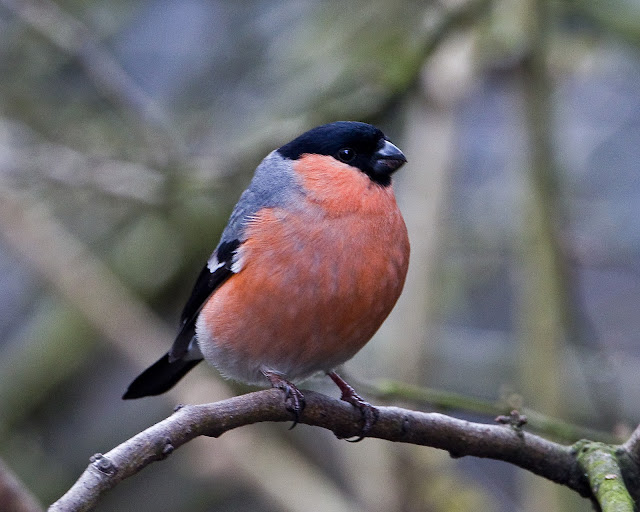 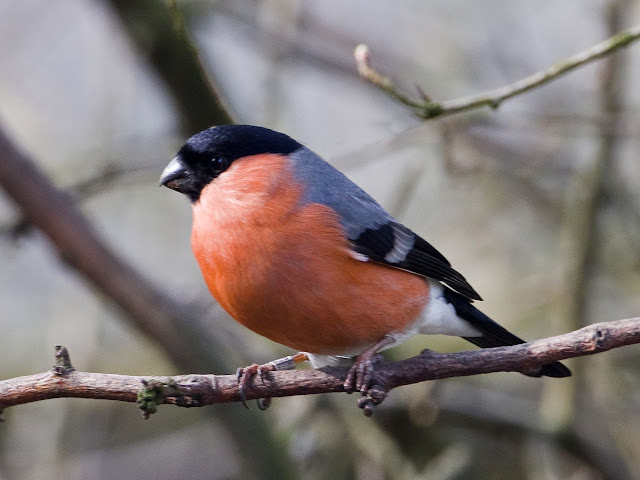 It may be a case of the grass always being greener but it seems to us that the RSPB sites in the north of England are far better at getting birders close to the birds. Fairburn Ings was no exception and it is a place I will be visiting again.