Just back from a weeks birding with Dave in the Coto Donana, so if you read both blogs they are going to look very similar. We had a great time and saw a lot of birds although the weather was far from ideal. We had strong winds, overcast skies and at times torrential rain.

Before we went I had been worried about the marshes being too dry. Up until early January, Spain and Portugal had been experiencing a severe drought, but I can confirm that it is now over. We found fields and roads flooded, fords that we wanted to use under deep and fast flowing water and in one case water coming over the bridge instead of under it. All part of the entertainment really.

There were a couple of locations that we couldn't get to and a few extended journeys to get around the blockages. We also had one occasion where we were lucky to be able to extract the car from a muddy track.

Perhaps the best place to start is El Rocio, the town in which we were based for the week. It is in a great location with a large lagoon "La Madre de las Marismas" just to the south of the town and with a promenade and viewing points from which to observe the birds. Be aware, however, that this looks more like a wild west town with sandy pot holed roads and horse rails outside every house. It is a bit touristy, the lagoon can dry up in the summer and you need to avoid the pilgrimage season when the town will be solid with people but it's certainly full of character.

The novelty of seeing the Flamingos, Spoonbills and Black-winged Stilts soon wares off and our early morning walks along the promenade where mostly focused on the smaller birds, the warblers, hirundines  and and anything skulking in the foraging areas around the waters edge. A Little Bittern disappearing into the reeds in the half light was a missed opportunity but Purple Swamphen, Sardinian Warblers, Cetti's, Black Redstarts and Red-rumped Swallows were all worth following.


It was also good to see a flock of Tree Sparrows but they got very little attention as they were closely followed by a small flock of Common Waxbills. Common they may be but these were a life tick for me and not a bird that I had expected to see in this location. They are usually sedentary in just a few locations in Spain and Portugal but had probably been driven to move by the high water levels.


Not a bad location to use as a base. More blogs on the Coto Donana to follow.

The Laguna was one of the best places we visited. It would have been worth it just for the Azure-winged Magpies which would come to bread thrown out in the picnic area. We saw them in lots of other places but this was the only one that offered close encounters. 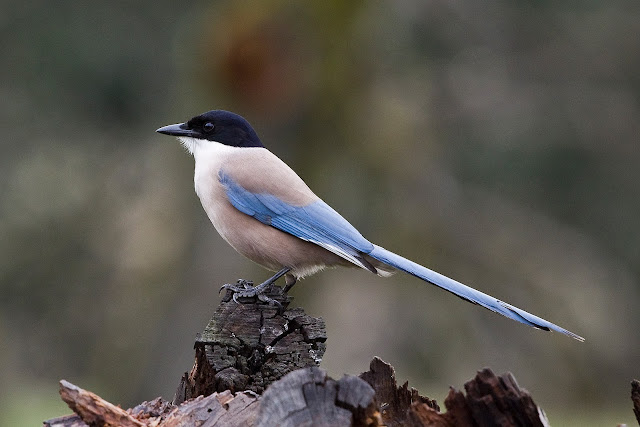 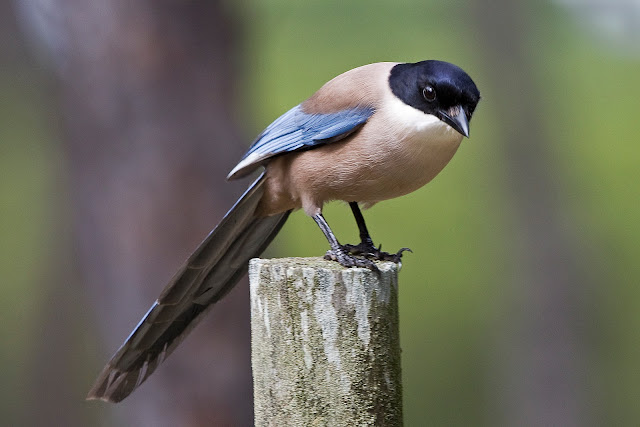 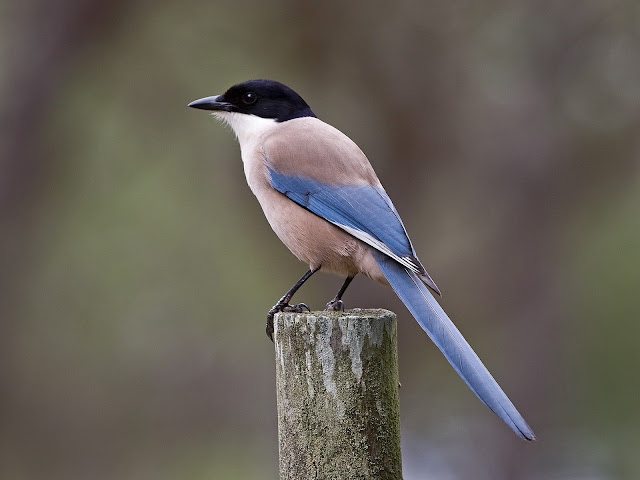 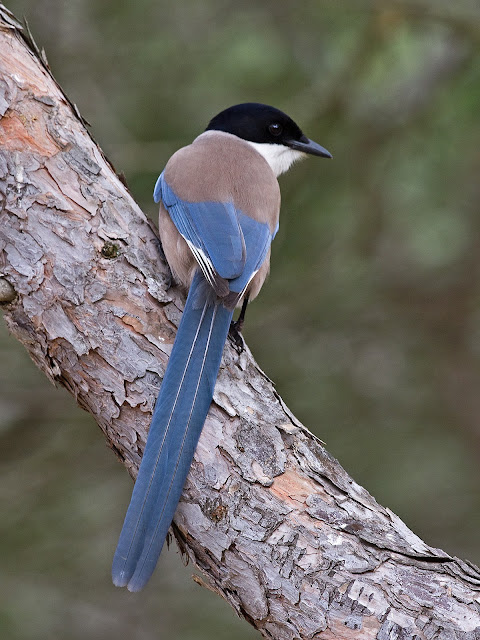 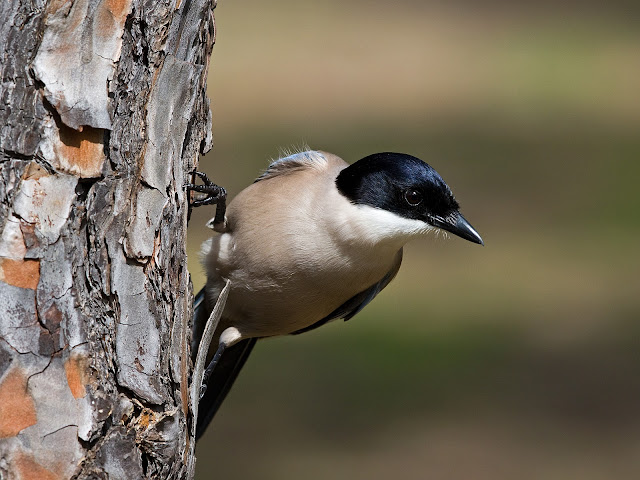 As well as the picnic area there were seven north facing hides giving good lighting for photography, although we could have done with a few more birds to make the most of the facilities. There were also two more hides out to the west, the Coot hide and the Stork hide. They were a bit of a trek and when I got there I found both lagunas to be bone dry with the only birds in sight being a Blackbird, a Chaffinch and a very distant Stork on top of an electricity Pylon. Check with the visitors centre before you set out.


We had our doubts on the Ferruginous Duck as it was in close proximity to a male Pochard. We thought perhaps Ferruginous x Pochard Hybrid but later, seeing it by itself and seeing the white patch on the upended tail, below, we settled for female Ferruginous. 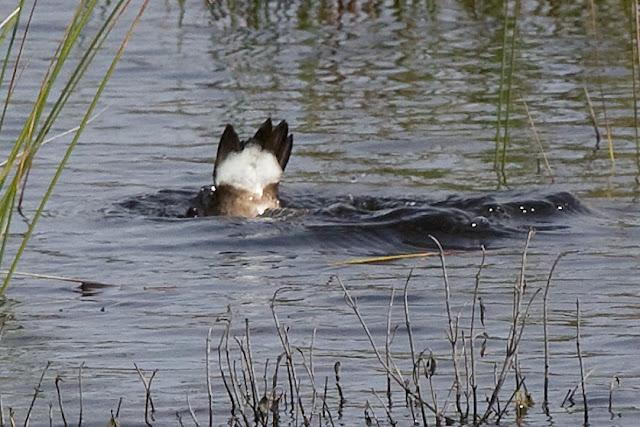 The most common bird on the water was the Little Grebe. They were surprisingly noisy and quarrelsome but I suppose this is just a sign that breeding season is upon us. 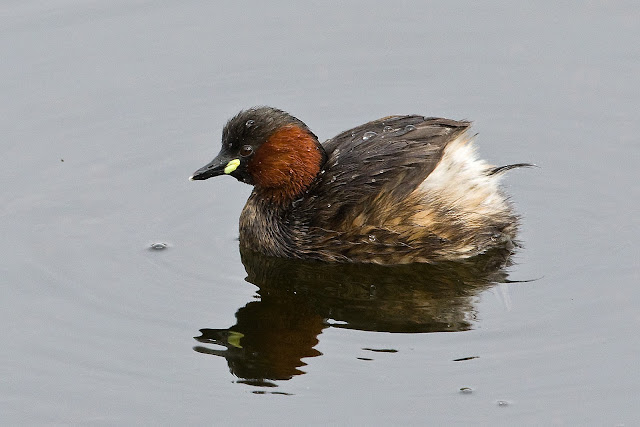 Plenty of Larks around the site, this one a Thekla Lark.

Also reasonable views of two Purple Herons although both were sufficiently concealed to make a decent photograph impossible.


Perhaps my best birds from the site, two Short-toed Treecreepers. I have to say that I was not totally convinced by the wing markings and I couldn't hear them calling but Collins informs me that the nearest "common" Treecreepers are about 500 miles to the north in the Picos mountains. 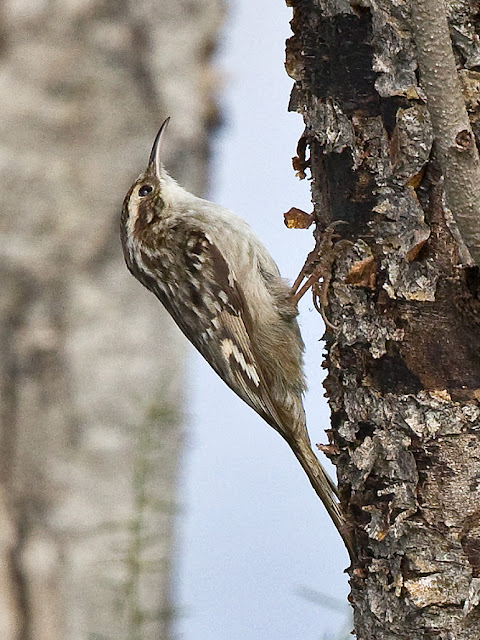 Lots of small birds around, particularly Black Redstarts and Stonechats but very few close enough for a picture.

Posted by Martin Peacock at 12:30 No comments: Links to this post

We did the loop twice. This is a 60km round trip from El Rocio to the start of the loop then about 50 Km on pot-holed and dirt track roads. Hard work but even in heavy rain the roads were all passable and there were a lot of good birds to see.

Black Kites, Buzzards, Black Redstarts, and Iberian Grey Shrikes on the way in from El Rocio. We also saw Woodchat Shrikes but couldn't get the picture.

My advice would be to give the western route a miss. It was mostly industrial scale farming and all the ditches had recently been dredged with the soil dumped back on the canal side vegetation and reeds. There was very little to see other than one stranded motorist that we had to stop to help. It's a bit like being in the outback.

We had two or three encounters with a Black-winged Kite and on one of the occasions with a pair of them, at the start of the eastern loop. A life tick for me but he really didn't want his picture taken. I also managed to overexpose the only clear shots that I had. The best of the rest is shown below.

Much confusion was then caused by going back to the location on the last day of the holiday and photographing the bird below, hunting on the same strip of land. Sad to say, it wasn't until I got home that I noticed the yellow eye. The old problem, too busy trying to get the photograph and not seeing the bird that is in front of me. In my defense, it does look a bit like a Black-winged Kite and it was in the right location.

There are a group of derelict holiday homes about 5km from the Visitors Centre. They are marked as Choza de Huerta Tejada on the map. It is worth stopping here to look for the colony of Lesser Kestrels based around the buildings. Although you will need to brush up on your identification skills as there are also a couple of "common" Kestrels in the same area.

I also had a Subalpine Warbler on the fence in front of these buildings but the photograph is not worth showing.


We also found a couple of small flocks of Spanish Sparrows on the way back. They seemed to be mostly females but there was one good looking male present although he was difficult to photograph.

It was a couple of long days being shaken about in the car but you felt that there was still a lot more to see. The Black-winged Kite deserved having a day dedicated to it in order to get that definitive picture but time is all too short.