A trip over to the Knepp Estate on Sunday, looking for Purple Emperors, was successful in that I saw plenty of them but also disappointing, in that I did not see any on the ground. As usual they were patrolling territories at the tops of the trees, with just the one, pictured below, venturing about half way down and giving  a few record shot opportunities.

I would think that this is a freshly emerged individual that is just hardening off before he enters the skirmishes above him.

White Admirals were also on the wing and like the Emperors they were squabbling over territory. There are a huge number of trees around Knepp but the two I saw both appear to want the same space. Strange enough I saw a couple disputing the same spot last year. There must be something there that they want.

Lots more purple around the trees in the form of Purple Hairstreaks. Again a butterfly of the tree tops where they feed on honeydew secreted by aphids. They do occasionally come down to nectar on flowers but not today. An open wing shot of one of these down low is second only to a pristine Chequered Skipper on my butterfly hit list.


Lots of other butterflies around including a Small Tortoiseshell. Worth recording as I haven't seen many of these about this year.


And my first Small Skippers of the year. I had forgotten how small they are and initially took them to be a cloud of  flies buzzing round a muddy puddle.

The butterfly year list is looking a bit healthier after the past weeks focus and I also added my first Broad-bodied Chaser of the year. 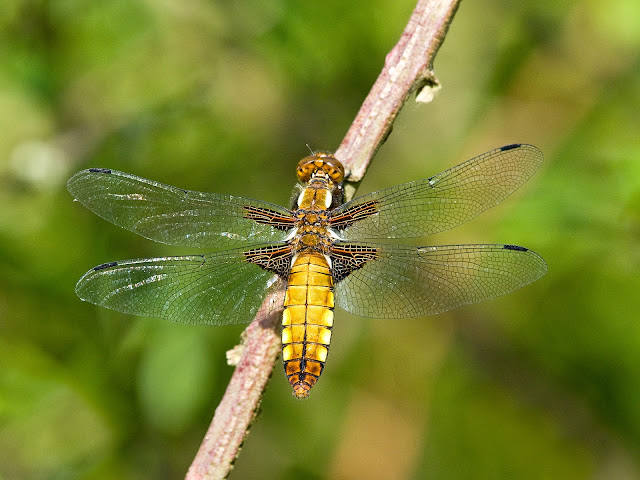 The blog should really be about the Black Hairstreak. I made a third trip over to Ditchling Common to see them. As before they were visible but they were staying high in the trees. Others have had good picture opportunities this year but it just hasn't worked for me. Strange when I had such good views last year.

My best shot for this year below and just to prove I can take a decent picture, one from last year.


I saw three large Fritillaries but none were stopping and I could not be sure on identification between Dark Green and Silver-washed. There were also a couple of views of Purple Hairstreaks but again staying distant at the tops of trees.

There were also a good few Painted Ladies around and a couple of Red Admirals. The later giving a closed wing view for long enough for me to get a picture. Interesting but as always with this butterfly the depth of red that we see with the eye just doesn't get recorded when photographed.


Looking for a bit more success I moved on to Hollingbury Park to look for the White-letter Hairstreaks. There are always a good display of thistles here and once down and nectaring these butterflies are easier to photograph.

And a few Damselflies recorded at Woods Mills.

With the recent focus on Orchids my bird list for the year is looking a little sad. I am around thirty to forty birds behind the norm and missing a good few of the common species. Thinking I would fill a few of the gaps I headed over to Iping Common today.

There are never a lot of birds on the commons but you do pick up a few of the scarcer species. Woodlark and Redstart were welcome finds but there was no sign of any Tree Pipits which I had also hoped to see. Both birds seen were distant views with only poor record shots obtained.

There were good numbers of butterflies around but most were hyperactive in the hot sun. Silver-studded Blues, in particular, are always good to see but I am still waiting to capture photographs of the ants tending the newly emerged butterfly. 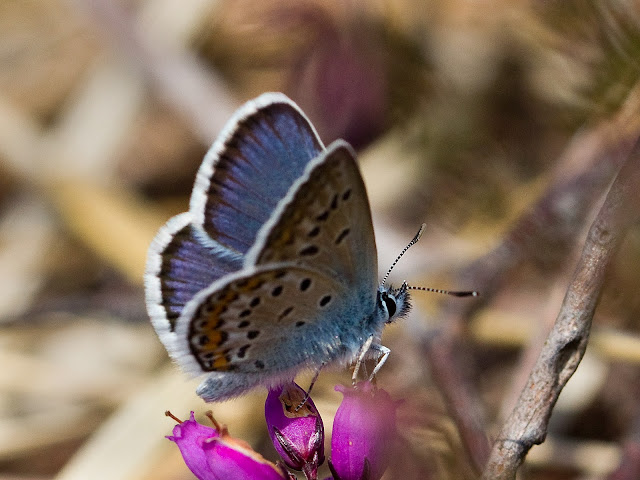 Males are easy to see but don't stay still for very long. Females are less conspicuous and tend to hide away in the vegetation. You can see why. If you do find a female you only have a few seconds to get a picture before the amorous male turns up.


He didn't have much luck. She took one look and headed straight for deep cover. 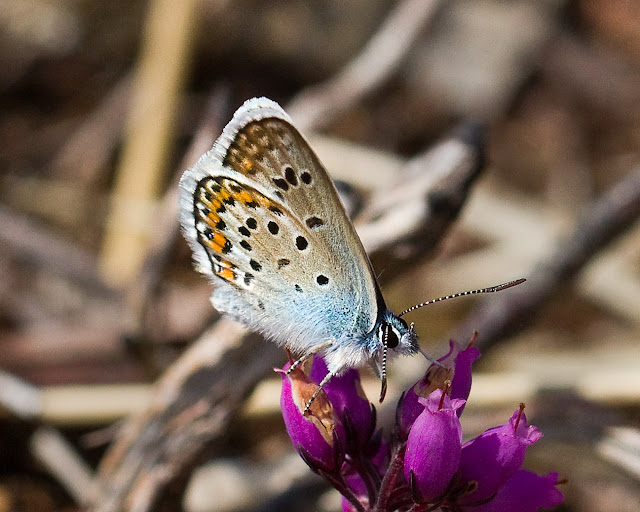 There has been an influx of Painted Ladies from the continent with appearances almost everywhere. Unfortunately most look as though they have flown all the way from North Africa and are not in best condition. There should be time for a second brood which will emerge later in the year and we may get good numbers of pristine butterflies which will be well worth seeking out.


There is always a chance of finding a Golden-ringed Dragonfly on the commons and if you find one that's in the middle of having its lunch it may even stay still long enough for a picture.


And a freshly emerged Four-spotted Chaser. Just a pity about the busy background.

Heath Spotted may not be one of the most exciting of orchids but it is one that I have not recorded before. With Black Hairstreaks on Ditchling Common and knowing that Heath Spotted Orchids could be found there, it seemed worth a visit.

At first the open spaces on the common did not look very promising, being mostly covered in dense bracken. However, a search finally located 150-200 flowering spikes at TQ33391841. Some were starting to go over but there were still a number in good condition and worth photographing. 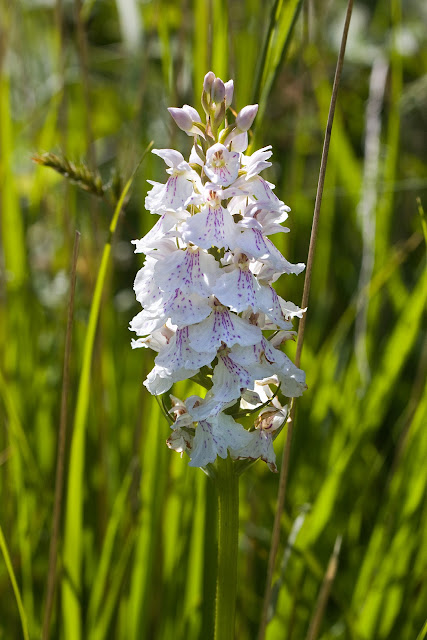 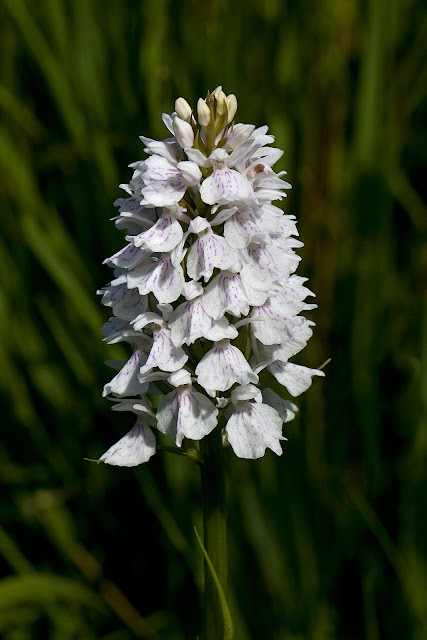 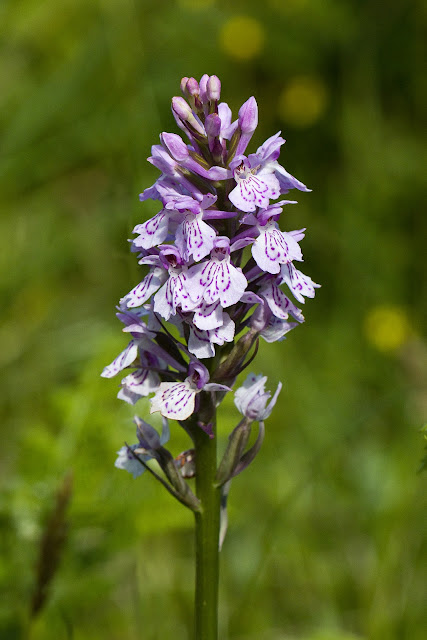 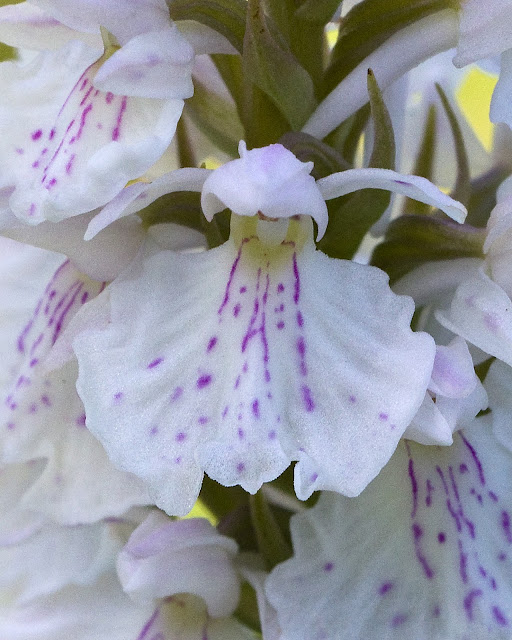 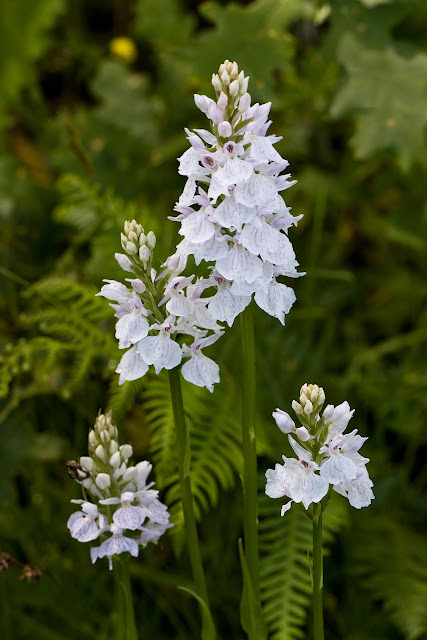 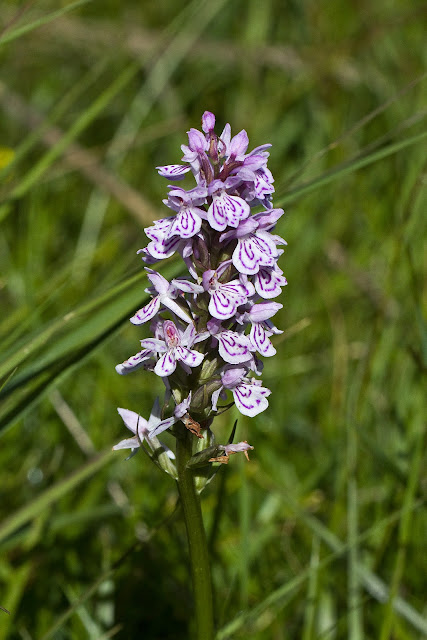 The second part of my quest, the Black Hairstreak was not so successful. Conditions seemed ideal and the butterflies were there but they seemed strangely inactive. What movement there was, remained at the top of the Blackthorn bushes, at around 15 to 20 foot height. I watched for about an hour early morning just as the temperature was getting up and again late morning but did not get a single butterfly coming down to pose. Strange when last year they gave such good picture opportunities. Perhaps a late afternoon visit is required to get some of them down nectaring.

Had a walk around Ditchling Beacon. Some good orchids on show. Perhaps a bit small on the top but some better specimens in the more sheltered areas.

Then, just when you think you have the identification of spotted and fragrant orchids nailed down you get one that doesn't look quite right. First thoughts were Heath Spotted but then the marking looks a bit too bold. Perhaps a touch of something else in there as well - Common Spotted or one of the fragrants? 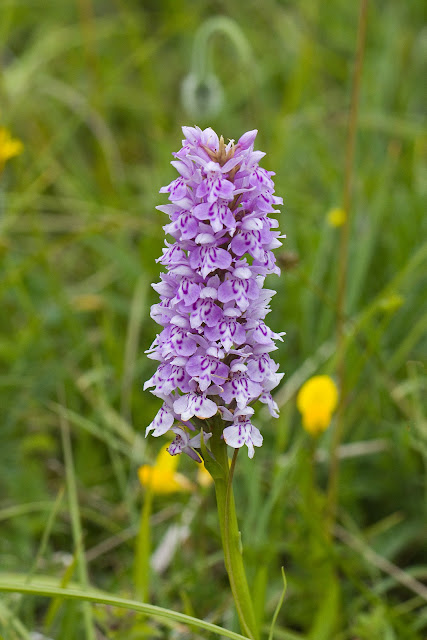 The visit was more about getting an idea of where to look for Marsh Fragrants. The flowering period for these in Sussex on chalk is mid July through August so a return visit will be required soon.

I've not spent much time butterflying this year but we did go to Park Heath Corner to record the Small Pearl-bordered Fritillary. They have always been one of those, must see every year species, although that may fade now that the population at Park Heath is becoming more stable.


They are usually hyperactive and difficult to photograph but we must have got the timing and weather just right this year. Frequent clouds passing over left the butterflies stationary and open winged waiting for the sun to re-appear.


Other butterflies are starting to show after the summer break but some of our favourite spots don't seem to have got going yet. Sunshine and higher temperatures promised over the next week should liven things up

Below a few firsts for the year spotted whilst out looking for Orchids.


Perhaps I have not been looking as hard this year but there don't seem to be as many butterflies around as usual.

Searching closer to home today, looking for Frog Orchids at Fairmile Bottom. We had seen a couple there last year so had one area to search but we were fortunate in meeting up with two of the West Sussex countryside rangers who look after the site. An exchange of information and we had another area for Frog Orchids and also some helliborines to investigate.

Fairmile Bottom is a big area and Frog Orchids are not easy to find but with an idea on where to look we ended up finding about a dozen spikes. The lime green colour of the fresh spikes gives them away even when growing in long grass and they are best spotted when viewed at a low angle rather than looking down on them.

I got a bit excited when I saw one of the Bee Orchids. It looks as though it should be something unusual but it's just a bee orchid where the lip and nib have not turned under.