I visited Bramber Nature Reserve this morning. I had been intending to visit for a while but was triggered into action by reports of a Tawny Owl and owlet in one of the trees close to the entrance.

I arrived early and spent some time searching the tree. The adult (I assume a female) was easy to find but getting a photograph proved to be difficult due to the branches blocking the view. The chick if it was still there must have been well hidden as I could not find it. 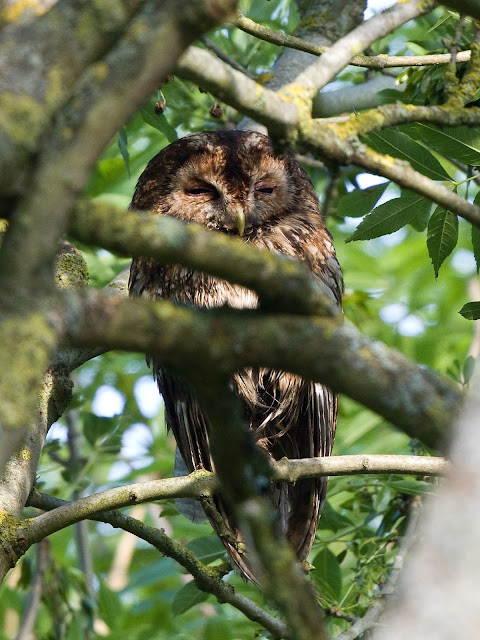 I went for a walk around the reserve and returned an hour later. It was good timing on my part. Not only had the owl moved position but the light had improved and the owl briefly opened it's eyes. 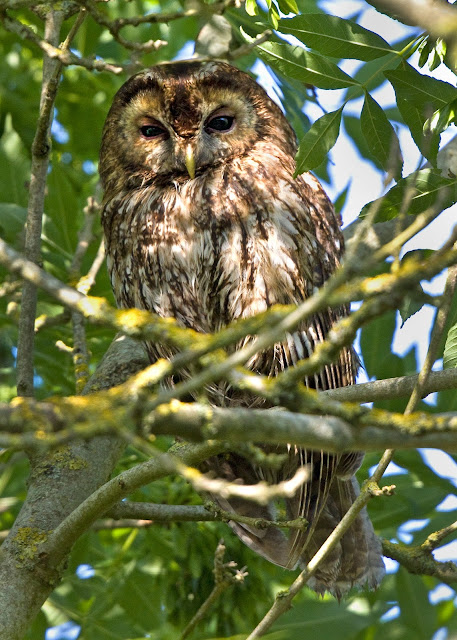 Common Whitethroat, Blackcaps and a Green Woodpecker were seen around the reserve with Reed and Sedge Warblers heard only. Unfortunately none were giving picture opportunities. The reserve is a great addition to the local area and in particular to the chances of maintaining a green corridor along the Adur River.


The mornings target achieved and it only just having turned eight o'clock I decided to drive over to Park Heath Corner and have a look for the Small Pearl-bordered Fritillaries.

It was very quiet when I arrived but they were soon flying and in numbers greater than anything I had seen on the reserve before. A real success story for the Fritillaries for the Future project and for a butterfly that seemed to be lost to Sussex only a few years ago.

I spent a couple of hours trying to get a photograph but failed miserably. It was a hot morning and the butterflies which were probably all males were hyperactive. They are always difficult to photograph but I usually manage to get a couple of shots. For best results you really need a female or mating pair or a return late afternoon when they may be getting tired and will spend some time nectaring. Or it could just be that I am getting too old for chasing butterflies around under the hot sun!


Next stop was Old Lodge in the Ashdown Forest. I was hoping for Tree Pipit and Woodlark but there was very little moving. The temperature was getting uncomfortably hot and the area was very dry, although the dragonfly ponds still held some water and  a few dragonflies.

I spent a couple of hours walking around and did eventually get to see a two Woodlarks just as I was returning to the car park to leave.

Probably my best find of the day was the plant below. It looks like Bog Beacon Mitrula paludosa which has been recorded at Old Lodge but I can't be certain, apparently there are several very similar Mitrula species, separable only by microscopic examination.

These specimens looked to be past their best. I will have to look out for it a bit earlier next year.