Reasons to be happy this week. The moth trap delivered its highest count of the year, well into double figures at 15 specimens of 12 species. Modest by most peoples standards but given that my last two attempts had delivered two and zero, I was well pleased. Even better we had our first garden Hawkmoth, although I have to confess I missed it completely with Sue finding it late morning whilst dead heading the pansies a couple of metres from where the trap was set.
Brindled Pug was a new moth for me along with the micro Platyedra subcinerea, common name Mallow Crest or Cotton Stem Moth.

Others were repeats but still welcome and it was just nice to have something to photograph and record for a change.

There were multiples of Shuttle-shaped Dart, three, and Ruddy Streak, two. It was good to get one of the specimens of the former in such good condition.

My first Dagger of the year was also in the trap. I found Grey Dagger caterpillars in the garden last year but short of dissecting this moth, which I don't do, I cannot tell if it is a Grey or Dark Dagger.

Also in near mint condition this Toadflax Brocade. The last one of these I had, looked to be in good condition, but it was very difficult to make out the patterns on the wings.

I also had difficulty seeing any pattern in this Early Grey. Surprising really when it has been the most common moth in the trap so far this year.

The Muslin Moth is a female, found whilst out looking for butterflies on Kithurst Hill a couple of weeks ago.

Also a Caterpillar found in the garden which looks to be a Marbled Green.

You wait ages to get a decent haul of moths in the trap and then you realise how long it takes to identify and record them all. I am always envious of the people that report three or four hundred but I think, until I get more experience, I will be happy sticking with the low numbers.
Posted by Martin Peacock at 21:24 No comments:

The butterfly season rolls on and next on the list is the Duke of Burgundy. A beautiful little butterfly and probably the easiest species in Britain to photograph providing you know where to find them.

The go to place around where we live is Kithurst Meadow. It is easy to get to, there are lots of Dukes there and they are easy to find. However, it gets a bit crowded and it's not much of a challenge so Dave and I decided to visit one of our old haunts Heyshott Down. A lovely location but it is further to drive, it's probably a two mile walk in, and you have to search a large area on a forty five degree slope.

The walk in is ok but we are both getting older and the forty five degree slope really takes it out on your knees. Particularly as we couldn't find any Dukes and ended up spending a couple of hours going up and down it.

It was colder than we had expected and there was a strong swirling wind but it was still a disappointment. The consolation prize was Dave spotting a micro moth during the walk out. We think it is the Green Longhorn Fairy Moth - Adela reaumurella

The next day I took the easy option and visited Kithurst. The Duke is quite a lazy butterfly, it doesn't get active until about eleven and it goes to roost at before four in the afternoon.

I missed the crowd by going mid afternoon but the number of butterflies had reduced from a reported twenty five plus to just four or five. No problem though, five was enough to keep me busy 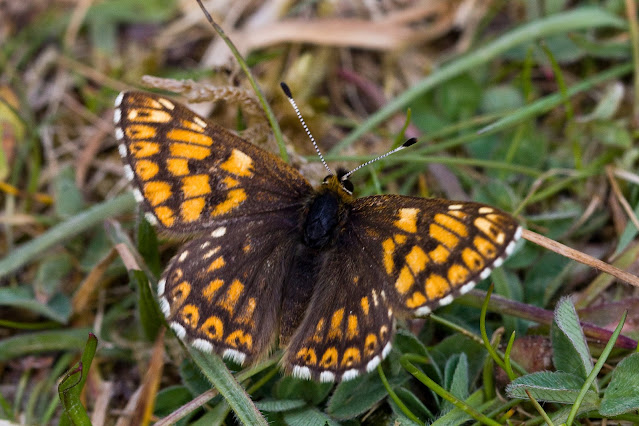 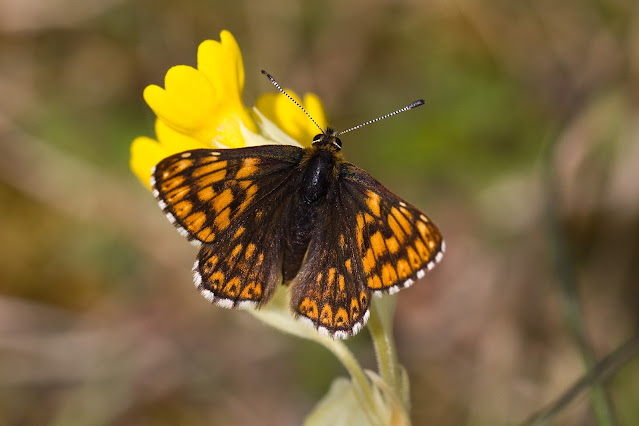 Great to see the Dukes once again but I have since learnt that Heyshott is no longer a good place to look for them. There seems to be problems with the scrub clearance there and the population is in decline.

Other butterflies seen at Kithurst included Brimstone, Red Admiral, Grizzled Skipper, Dingy skipper, Orange tip, Common Blue, Whites and Brown Argos, together with a couple of moths Pyrausta aurata the Mint Moth and Diaphora mendica the Muslin Moth. Pictures of a couple of them below. Unfortunately I did not manage to see the Small Blue as seen by a few the people there.

Whilst I was at Kithurst Neil Hulme kindly pointed out the nest of a Mason Bee. It was a good tip and whilst photographing the Dukes close by I had some good views of the bees in action. See the next blog for details.

Posted by Martin Peacock at 20:34 No comments:

So I am busy trying to photograph a Duke of Burgundy butterfly when I get photo bombed by a bee dressed in bright orange safety gear and carrying a big stick. It has to be worth further investigation.

It turns out that the bee is a Red-tailed Mason Bee - Osmia bicolor and it has an unusual nesting habit. Males appear in early spring and defend a small territory containing empty snail shells. The females arrive a couple of weeks later and once mated they build one or more nest cells in the shell using vegetation and mastic (chewed up vegetation). They then seal the shell with a plug of earth, stones, shell and more mastic. The snail shell is then moved to its final location, turned so the entrance is facing the ground and sometimes part buried.  Mastic is painted on the outside of the shell and it is then covered, by the females, using vegetation and small sticks.

I had missed the first part of the process, arriving on the scene when the female was busy concealing the shell. She started by dropping sticks and vegetation onto the shell but as the cover grew she took to placing items into the build to better improve the cover.

She also appeared to be using saliva or mastic to hold the construction together.

A lot of effort goes into the build process, probably a lot more than is required just to cover the snail shell. Given that the female could construct five or six nest sites like this during the breeding season, I assume that this type of structure offers better protection against predators and parasites.

Fascinating to watch but the sad thing is, that the nest is being built in Kithurst Meadow, a very popular Duke of Burgundy butterfly location. It is already well trampled and the chances of this nest site surviving must be slim.
Posted by Martin Peacock at 09:29 No comments: