Bearded Tits and Others

I spent most of Sunday over at Farlington Marsh with Dave looking for the White-fronted Geese. We must have searched over a thousand Geese but could find no sign of our target bird and I returned home without a single picture.

The White-fronted were reported again on Monday so we decided to give it another go. There was some encouragement early on when we saw a flock of about sixteen Bearded Tits and also had glimpses of a Cetti's Warbler. A good start but there were no pictures and as lunch time approached it was becoming clear that the White-fronted were not on the Marsh.

All very depressing and it was looking like another days birding with very little to show for it. Then out on the marsh Dave saw his lucky black rabbit from last year and suddenly lots of birds started to appear. 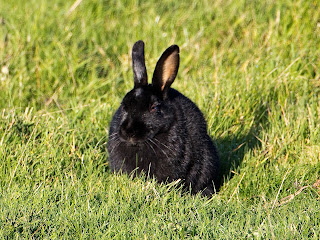 A Marsh Harrier flying over, a Buzzard sitting out on the marsh, and a Kestrel that was to give us some great views. We found the Kestrel first sitting in one of the bushes by the side of the path.

Later we watched her hunting from another tree then catching and eating some unfortunate small mammal.

The bird seemed unconcerned about people and even allowed a dog walker to pass within about twenty feet whilst it was sitting in the tree just above head hight.

Whilst watching the Kestrel we also had a pair of Stonechats close by on the sea wall.

We also managed to refind the Bearded Tit flock we had seen early in the morning. They were moving deep within the reed bed and were difficult to photograph but I did manage a couple of record shots.

There was still no sign of our target species the White-fronted Geese but by this time we were a lot less concerned. We will catch up with the geese another day.

In the afternoon we decided to head back into Sussex and visit Pagham North Wall. Recent changes to the drainage there have resulted in a lower water level and a lot more mud which should start to attract more waders.

It is probably also the reason why we found four Water Rail out on the mud feeding around the edges of the reed beds. They are not the most sociable of birds and they spent a lot of their time squealing at and fighting each other. Great to watch but it's just a shame they were not a bit closer.

Much more enjoyable birding today with a lot of new bird behaviour observed. Lets hope the weather holds and we can have a repeat tomorrow.