This was very nearly a replay of my 6th January 2019 blog about a White-rumped Sandpiper at Pulborough Brooks. On that occasion I had sightings of a very distant bird that had been identified as a White-rumped Sandpiper. Despite watching the bird for a couple of hours, during which time it barely moved, I could not see sufficient detail to make the identification myself. It was a life tick missed.

The new bird was reported on the Ferry Pool at Pagham Harbour with a second bird being reported just a mile or so away at Medmerry Stilt Pool. Neither location sounded like a good option for viewing a White-rumped Sandpiper. The bird is smaller than  Dunlin and would probably be around 150m from the nearest viewing points at each site. With a risk that either bird could fly the choice was easy. The Ferry Pool was closer  and would not involve such a long wasted walk if it did disappear.

A quick scan when I arrived located a promising suspect feeding with a small flock of Dunlin.

As with the Pulborough bird, it was overcast and difficult to make out the detail but the general impression was good. Smaller than the Dunlin, bill shorter than the Dunlin, a more slender bird, and with wing tips that extended beyond the tail. There also appeared to be a white supercilium but it did not show as much as I would have liked and the picture above is the only one that showed any sign of it. Slightly decurved bill? well possibly but it is always a subjective assessment. It is difficult to make out the plumage detail on the pictures but white underparts and streaking on the breast and flanks were visible through the scope.

Views through the scope were clearer but the pictures, even if poor quality and heavy crops, give you the opportunity to spend longer considering the identification. 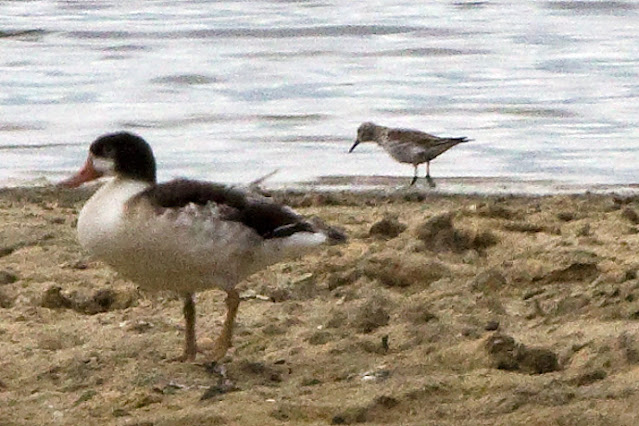 It was looking good but these are not birds that I know well and I hadn't ruled out the very similar looking Baird's Sandpiper. I needed to see the white rump. There were reports of birders I trusted having seen it flying earlier and showing a white rump but having rejected the Pulborough bird I was not going to leave without seeing it for myself.

I had to wait but after a dispute with one of the Dunlin it did eventually fly and it did show a white rump so having waited over three year I had my life tick. Where is the picture of the white rump. I didn't even attempt it. I have made that mistake before, rushed to get a picture, failed to get it in focus or in frame and then realised that I had neither picture or memory of what I had been looking at.

I haven't done much birding lately but getting a life tick and adding Common Sandpiper and Little-ringed Plover to my very modest year list made for a pleasant afternoons birding.